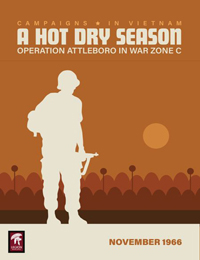 A Hot Dry Season: Operation Attleboro in War Zone C (AHDS) is an operational-level game
dealing with the National Liberation Front (NLF) Dry Season Offensive in the III Corps Tactical
Zone (III CTZ) in November 1966 and the subsequent counterattack by forces under the
command of Military Assistance Command, Vietnam (MACV).

From the designer’s website:
To Military Assistance Command-Vietnam (MACV), Operation Attleboro was a meeting
engagement in War Zone C that grew into the largest operation involving US Forces conducted
in South Vietnam at that time. To the Central Office for South Vietnam (COSVN), Operation
Attleboro was unexpected early contact by a force attempting to conduct an offensive that
snowballed into a desperate defense and fighting withdrawal to protect precious logistic and
command capabilities essential to their future operations in III Corps Tactical Zone (III CTZ).

MACV grossly underestimated the National Liberation Front’s (NLF) capability to supply their
own forces, tactically maneuver them, and evade detection in order to threaten US/Army of the
Republic of Vietnam (ARVN) infrastructure and units when operating in close proximity to
Peoples’ Liberation Forces of South Vietnam (PLAF – what are popularly known as “Viet Cong
Main Force”) base areas in Cambodia. COSVN grossly underestimated the US’s capability to
rapidly reinforce an area of operations using strategic mobility and rapidly employ such
reinforcements almost immediately in the field.

MACV underestimated the proclivity of COSVN to use PLAF forces confront and destroy threats
to its logistics and supply system. COSVN erroneously expected US Forces to respond to
tactical and operational dilemmas like the ARVN. To wit, responding to “Ambush and Bait” with
dispersed pursuits of the ambushers on multiple axis, thus leaving some pursuing units
vulnerable to destruction via “One Slow, Four Quick”. Both sides were unaware of flaws and
gaps in their respective intelligence, surveillance and reconnaissance (ISR) networks, and the
murky picture of active operations that would result from a clash of this magnitude, in the trying
terrain of War Zone C. Neither side gained any lasting advantage from Operation Attleboro,
though both sides missed opportunities to secure them.

The game’s scale is Company as the primary unit size, day turns and a mile per hex. AHDS
uses a concealed information/movement mechanism for NLF units and a limited information
availability mechanism for both sides, and heavily emphasizes Intelligence, Surveillance and
Reconnaissance (ISR) capabilities and their impact on revealing concealed/limited information
units. The game uses a movement point system and combat result table mechanisms fires, air
defense fire and ground combat. AHDS has an asymmetric component to its turns, as an
Initiative player determines the order of resolution of Fires attacks and missions and then
Operations (movement and combat). Within Operations, interactivity and reactions to phasing
player action; reaction moves, and hasty attacks may be performed by the non-phasing player
as the phasing player’s turn is resolved. Uncertainty is added to victory and even game end in
the campaign by the use of Operational Guidance chits which are selected before set up –
neither side may be exactly certain what the other’s priorities are, which impacts victory
conditions and player strategy as the game progresses.

AHDS contains 7 scenarios: Introductory, Basic, and Intermediate, ranging from 3 to 10 game
turns. The campaign is 25 turns long, but may, through Operational Guidance chit play referred
to above, last 30 turns.

AHDS is the first entry in a new series, Campaigns in Vietnam, which features a “Ground-Up
Build” system. While sharing core concepts and “DNA” in resolution of play and
movement/combat mechanisms, each title is built from the “Ground-Up” allowing specific
tailoring of concepts and rules mechanisms in an attempt to accurately evoke the very different
Campaigns fought during the Vietnam War from 1965-1975 and faithfully incorporate the
dynamic changes in force structure and composition, weapons and ISR capabilities, specific
operational goals and difficulties, and terrain and regional variances unique to Vietnam and the
Vietnam War.