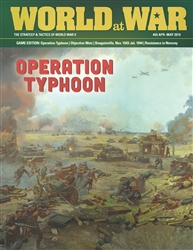 Operation Typhoonis a solitaire operational-strategic simulation that covers the final advance toward Moscow of Germany’s Army Group Center late in 1941. The player actively commands the German forces, while the rules system directs you in the handling of Soviet forces. The system allows the player to plan and execute his advance towards Moscow with the Soviet defending forces being randomly created in each hex dependent on the terrain. You win or lose, ultimately, based on the timely seizure of key areas on the map. Each game turn equals one or two weeks. Each hexagon represents 7.5 miles (12 km) from side to opposite side.

Though designed for solitaire play, Operation Typhoon is easily adaptable to cooperative team play. One person can administratively handle the Soviets while the other actively commands the German force. Alternatively, one player can command the three northern German armies and panzer groups while the other commands the three southern formations. The game map represents the terrain in the operational area of Moscow, with each unit representing the historical German divisions and generic randomly generated Soviet defending forces.