Thunder in the East 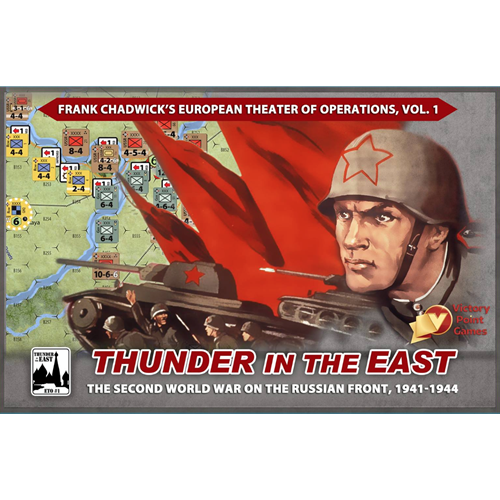 Thunder in the East is the first volume of the Frank Chadwick’s ETO series of strategic-level wargames covering all of World War 2 in Europe. Legendary game designer Frank Chadwick presents a “player’s wargame,” revealing the sweeping narrative of the Russian Front using familiar and comfortable systems writ large in scope. With its origins in his classic introductory wargame Battle for Moscow, players will harken back to how we discovered our wargame hobby – when the rules lived in the box for occasional reference and we spent our time over the map having fun every single turn playing a great wargame.

A typical German breakthrough on the first turn of Barbarossa

In Thunder in the East, the epic war along the lines of the Russian Front resembles a vast knife fight of thrust-and-maneuver as both players vie to define, defend, and defy such lines wherever they materialize. The strategic and ever-changing elements of time and space provide endless, evolving on-map puzzles that are every wargamer’s catnip to solve.

Assembling deep research into smooth gameplay mechanics where historically concrete facts reign over abstract alternatives, designer Frank Chadwick has cleverly simulated the titanic Russo-German struggle, creating a true historical voyage of discovery; players will certainly leave the game table with a better understanding of this cataclysmic conflict. Narrative Event cards, selected by each player, undergird each side’s military, economic, and political strategies, assisting (but not driving) gameplay; but player skill in the operational art of war is where the campaigns are won or lost. The war is ultimately decided on the map – unit-by-unit, maneuver-by-maneuver, battle-by-battle, and objective-by-objective in the best wargaming traditions.

Thunder in the East is a large game, grand in scope, covering a complex topic in an accessible way. Wargames that are smaller in scope see players carefully "drawing inside the lines" defined by the map edges and out-of-play areas. The large scope of Thunder in the East takes advantage of its bigness to erase those lines that limit your gameplay while always striving to keep things flowing quickly and easily using its simple Prepare-Move-Fight-Move turn sequence.

Included are six scenario start dates covering those decisive periods along the Eastern Front: Operation Barbarossa, Operation Typhoon, Case Blue, Operation Uranus, Operation Citadel, and Operation Bagration. Each scenario is a complete, stand-alone, robust wargaming experience; even better, they are linkable at any scenario’s starting or ending date to create continuous campaign gameplay complete with the economic underpinnings of the Soviet economy and the grim realities of Soviet morale.

Frank Chadwick has scores of wargame designs to his credit (including the Europa and Third World War series), while veteran game developers Lance McMillan (Battle for Moscow, Campaigns in Russia, Napoleonic 20 series) and Alan Emrich (Totaler Krieg!, No Retreat!, States of SiegeTM series) are, together, putting the culmination of all their experience on your game table in the Frank Chadwick’s ETO series and this incredible first offering from it: Thunder in the East. Their combined lifetimes making wargames, and the enlistment of a crack team of veteran playtesters, gives you sincere assurance that they have brought you a WWII wargaming hobby “grail game” – one that you will be coming back to enjoy for decades.

Army Group Center on the march in 1943