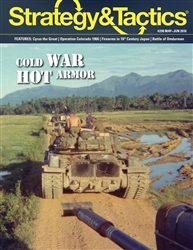 Cold War, Hot Armor is a two-player game in which players take command in armored actions during the Cold War. The game is part of a series; this particular game is set during the War in Vietnam, 1954-75. Future games will include battles in continental Africa, the Middle East and eventually a hypothetical NATO-Warsaw Pact conflict. The game system emphasizes command control, combined arms, and evolving technology.