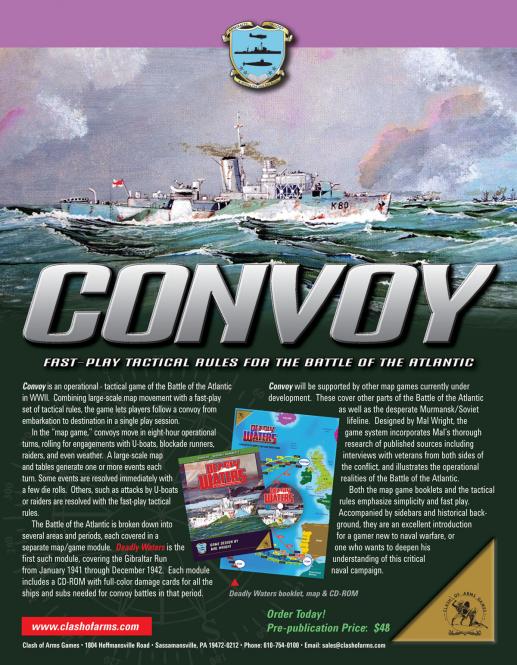 Convoy is an operational-tactical game of the Battle of the Atlantic in WW2. Combining large-scale map movement with a fast-play set of tactical rules, the game lets players follow a convoy from embarkation to destination in a single play session.

In the "map game", convoys move in eight-hour operational turns, rolling for engagements with U-boats, blockade runners, raiders, and even weather. A large-scale map and tables generate one or more events each turn. Some events are resolved immediately with a few die rolls. Others, such as attacjs by U-boats or raiders are resolved with the fast-play tactical rules.

The Battle of the Atlantic is broken down into several areas and periods, each covered in a seperate map/game module. Deadly Waters is the first such module, covering the Gibraltar Run from January 1941 through December 1942. Each module includes a CD-ROM with full-color damage cards for all the ships and subs needed for convoy battles in that period.

Convoy will be supported by other map games currently under development. These cover other parts of the Battle of the Atlantic as well as the desperate Murmansk/Soviet lifeline. Designed by Mal Wright, the game system incorporates Mal's thorough research of published sources including interviews with veterans from both sides of the conflict, and illustrates the operational realities of the Battle of the Atlantic.

Both the map game booklets and tactical rules emphasize simplicity and fast play. Accompanied by sidebars and historical background, they are an excellent introduction for a gamer new to naval warfare, or one who wants to deepen his understanding of this critical naval campaign.