Against the Odds 49, A Gate of Hell 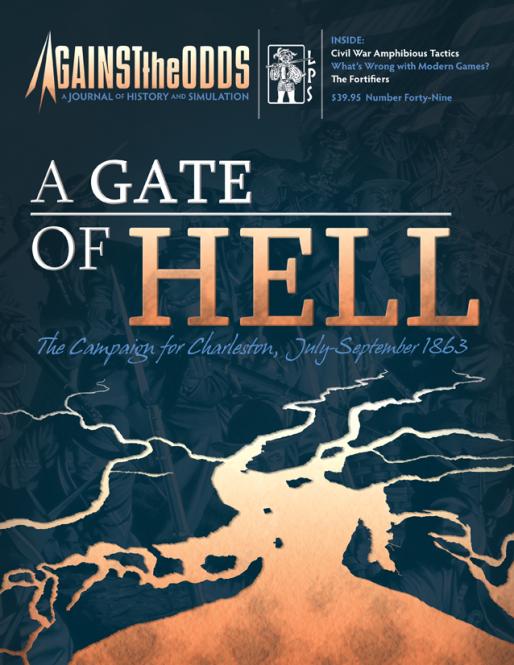 “The defenses of Charleston are like a porcupine hide with the quills turned outside in.”

During the summer of 1863, in the aftermath of the Gettysburg and Vicksburg campaigns, battles on land and sea were fought over control of the birthplace of the Confederacy, Charleston, South Carolina. A Union victory here would send an unmistakable signal to the states in rebellion as well as the rest of the world that the Confederacy’s cause was lost and further fighting a waste of lives and effort.

A Confederate victory in the face of the tremendous Union host, that included every Union Ironclad on the Atlantic and Gulf coasts, as well as some of the most seasoned regiments that numbered among them the first formations of all Black soldiers (free US citizens as well as former slaves), would signify the war would go on and that two nations, not one, could be the result of this “second” American Revolution.

Players in A Gate of Hell: The Campaign for Charleston, July-Sept. 1863 are cast in the roles of the historical commanders of the campaign; Pierre Gustave Toutant Beauregard for the Confederate defenders of Charleston, or Admiral Dahlgren and General Quincy Adams Gillmore of the Union. Can you do as well or better than they?

A Gate of Hell uses an interactive design to portray this decisive battle of the American Civil War. Players use “military support points” (MSPs), representing the logistical and political support for the campaign, to mobilize and support their forces (ground and naval) on one of the most inhospitable battlegrounds of the war. Both sides have a variety of military assets to deploy, but the planning and effective use of MSPs throughout the game will determine in large measure who is the victor. Units represent mostly regiments for the ground units, and each ironclad for the naval units. All of the famous batteries and forts, including Sumter and Wagner, are portrayed.

Rules cover Assault and Bombardment combats, multiple activations, the effects of battles elsewhere that can influence the actions at Charleston, the Union’s “Swamp Angel”, as well as the early completions of the Confederate ironclad Charleston and submarine Hunley.

Three scenarios are in included. One is on the April 1863 naval offensive by all of the Union ironclads that sought to defeat the rebel’s fortresses and is an excellent single-turn introduction to the game’s naval combat rules. A second is another single-turn scenario on the initial Union assault on Morris Island and Battery Wagner. These single turn scenarios take under an hour to game, and are well-suited for tournament play. The third covers the entire campaign and that takes about 6 hours to complete.

Bonus Game Inside!: This issue also features an extra game, All or Nothing. By late October of 1777, the British had repulsed the American attack at Germantown, and were occupying Philadelphia in Pennsylvania. American forces still occupied two forts south of the city, blocking the only viable British supply line out to sea via the Delaware River. The British made plans to eliminate these two redoubts....

Can you as the American player hold off the British attack on Fort Mercer? The Pennsylvania State Navy, proud but inexperienced, stands ready to assist.

Will you as the Hessian player take the Rebel strong- hold to really secure Britain's grip on the American capital, avenge the defeat at Trenton last year, and perhaps end the rebellion once and for all?