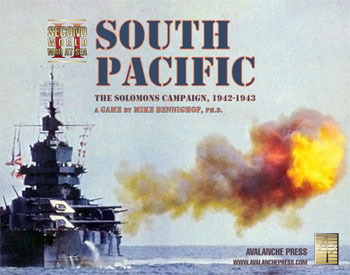 The U.S. Navy began its counter-offensive against the Japanese in August 1942, with landings on the islands of Guadalcanal in the Solomon Islands. The Japanese struck back in turn, and fierce naval battles raged in “Ironbottom Sound” by night while aircraft carriers dueled by day. The Americans and their Australian allies steadily fought their way up the Solomons chain until the Japanese base at Rabaul was finally isolated in June 1943.

South Pacific is a complete Second World War at Sea boxed game based on the Solomons Campaign of 1942 and 1943. It covers the naval battles of Guadalcanal, the carrier battles of the Eastern Solomons and Santa Cruz, the battles of Vella Gulf, Empress Augusta Bay and Kolombangara, and much more.

South Pacific includes over 1,000 silky-smooth, die-cut playing pieces representing the ships and aircraft of the United States, Japan and Australia that fought in the campaign. The 22x28-inch map includes all of the Solomon Islands plus the surrounding seas, and overlaps with the maps from our Strike South game on its western edge.

Unique in the Second World War at Sea series, South Pacific includes not only the standard, generic Tactical Map but also a special Tactical Map showing “Ironbottom Sound” north of Guadalcanal, where so many Japanese and American ships and sailors would be lost.

There are over 60 scenarios, organized in our popular “story arc” format that weaves the narrative of the campaign into the scenarios, allowing them to tell the story of this pivotal series of battles.