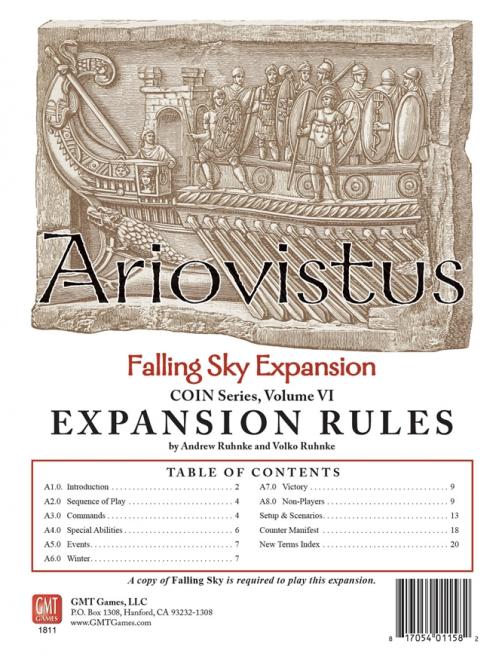 Gaul, 58 BC:  Competing Celts have invited mercenary Germans and then an ambitious Roman governor into their divided land as protectors. Before Caesar’s audacious claim to the whole of Gaul leads his legions even farther north to war with the Belgae, a great Sueban chieftain will call ever more warbands out of Germania’s forests to launch his own bid for dominion.…

ARIOVISTUS expands FALLING SKY to take 1-4 players back to Caesar’s first entry into Gaul, with a Helvetian migration challenging the Aedui and Germanic Tribes pressing close behind. New components and Faction enable one player to take command of the Germanic Tribes, while veteran Roman, Aedui, and Belgic players face unfamiliar strategic dynamics and deal with new events. For the heartiest, an extended scenario covers Caesar’s full time in Gaul—nearly a decade of resistance and revolt….

To this prequel to the popular COIN Series volume, the expansion package adds tactically refined, more aggressive Non-players and extra-sturdy Forces mats usable in both original FALLING SKY and ARIOVISTUS scenarios. (A copy of FALLING SKY is necessary to play.)