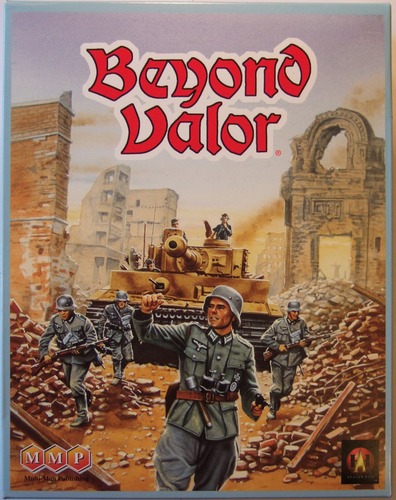 Beyond Valor is the first, and most important, of the Advanced Squad Leader modules. BV contains the German and Russian orders of battle from 1939-1945 as well as three different squad-types of Finnish troops. Additionally, the module contains the necessary markers and fortifications required by the ASL Series.

The newest, and we anticipate the last (should further reprintings be required the contents are not expected to change), printing of Beyond Valor has 10 ASL Starter Kit-style maps and 24 scenarios which use just those maps and the counters in the module. Paired with the ASL Rulebook, Beyond Valor is quite a lot of ASL in a single box. DYO possibilities are endless, and additional scenarios using only the components in BV can be found on our website in the downloads section.

Beyond Valor 3rd edition contains 24 scenarios that are playable with what is in the box. Scenarios 1-10 are the ten original ASL scenarios, published in the first and second editions of Beyond Valor. Scenarios 123-136 were previously published in other out of print venues (The GENERAL, ASL Annual, or ASL Journal) and are being renumbered with their inclusion in Beyond Valor. Previously identified errata have been incorporated, and some Victory Conditions and Scenario Special Rules have been reworded slightly for clarification. Five of the latter group have been changed to improve play balance and are annotated as updated.

Below are the official errata that have been incorporated into the five scenarios that have been updated in Beyond Valor. The scenarios are listed by their old number, with the new number shown in parentheses.

Eight more classic ASL scenarios that are fully playable with only what is in Beyond Valor 3rd edition are available for from the MMP - website.