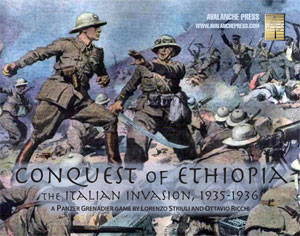 Every man must report for war. Those who do not will be killed.
- Emperor Haile Selassie, mobilization decreee, September 1935

Without the formality of a declaration of war, in October 1935 Italian armies stormed into Ethiopia from both north and south. Badly outgunned and outnumbered, the Imperial Ethiopian Army resisted for six months before its final collapse. Italian forces deployed tanks, aircraft and poison gas against the Ethiopian levies, who fought back with suicidal courage and little else.

Conquest of Ethiopia is a complete boxed game in the Panzer Grenadier series based on these battles. You do not need any other game to play any of its 40 scenarios. Design is by Lorenzo Striuli and Ottavio Ricchi, authors of our Fronte Russo supplement.

Ethiopia’s defenders include the elite Imperial Guard, and a number of regular battalions that are fairly good troops armed with modern weapons. Beyond that, things get a pretty bad for the Ethiopians pretty quickly. There are three distinct Ethiopian forces at play: the Imperial Regulars, the Imperial Levies (local forces loyal to the throne) and Provincial Levies (local forces loyal to their own leaders, usually a Ras or Duke). None of the levies are very well-armed.

The game includes eight semi-rigid mapboards, with art by Guy Riessen. The maps are fully compatible with all others in the Panzer Grenadier series (and those from Panzer Grenadier (Modern) and Infantry Attacks, too). Plus 517 playing pieces: smooth, scorchless, sootless laser-cut pieces, a joy just to hold in your hands. And 40 scenarios.