Panzer Grenadier: An Army at Dawn 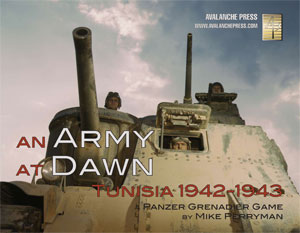 In early November 1942, American and British forces stormed ashore in French-ruled Morocco and Algeria, beginning a campaign to press the Axis into a small bridgehead around the ports of Tunis and Bizerte in Tunisia. The U.S. Army had its first exposure to combat in the European Theater, while fresh British forces joined the veteran Eighth Army against the Axis. French troops fought first against the Allies, then with them. Inside the shrinking perimeter, German and Italian units continued to offer fierce resistance.

An Army at Dawn is a complete boxed game in the Panzer Grenadier series based on these battles. You do not need any other game to play any of its 40 scenarios. Design is by Mike Perryman, creator of our Liberation 1944 and Kursk: Burning Tigersgames.

After running across Libya to escape the British, the German Afrika Korps has been reinforced by a fresh panzer division and the newest equipment including Tiger tanks. Crack Italian units have been sent to Tunisia as well, and a handful of German paratroopers, too. The French are outclassed by everyone; three years isn’t a long time but it might as well be a decade or two in terms of military hardware, and the weapons of 1940 just won’t cut it against the tanks of 1943.

On the Allied side, the U.S. Army is the dominant force. Not yet the skilled force that will crush Nazi tyranny, the Americans are still encumbered by some weapons and tactics born of pre-war thinking: the 37mm anti-tank gun, the half-track tank destroyer and the M3 Lee tank. But they also have the M4 Sherman, and plentiful air power and artillery. There’s also a small British contingent, and the French come around to the good guys’ side as well.

The game includes four semi-rigid mapboards, with art by Guy Riessen. The maps are fully compatible with all others in the Panzer Grenadier series (and those from Panzer Grenadier (Modern) and Infantry Attacks, too). Plus 517 playing pieces: smooth, scorchless, sootless laser-cut pieces, a joy just to hold in your hands. And 40 scenarios.