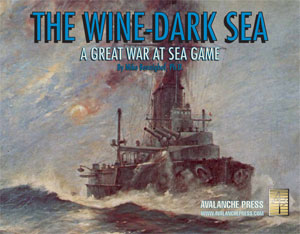 In one of the First World War’s best-known naval escapades, the German battle cruiser Goeben eluded her British and French pursuers in August 1914, escaping to Turkey and helping to widen the war into entirely new theaters. That would only be the first of many naval operations on the Mediterranean Sea and the adjoining Adriatic and Black Seas with naval action continuing well after the official end of the war.

The Wine-Dark Sea covers all of the naval action in the Mediterranean between 1914 and 1918. The game includes 280 “long” playing pieces representing major warships, and 280 square ones representing smaller warships, aircraft and fleets. There are two operational maps, covering the entire Mediterranean Basin from Batum on the eastern end of the Black Sea out past Gibraltar into the Atlantic Ocean on the western edge.

There are over 100 scenarios included, organized in our popular “story arc” format that places them in historical context.