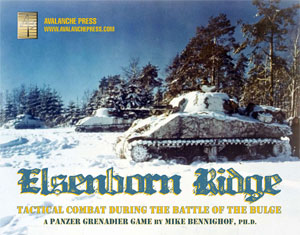 In late December, 1944, German armies rolled into the wooded hills of the Ardennes in eastern Belgium, striking a final blow against the American troops forcing their way toward German territory. Elsenborn Ridge covers the fierce fighting on the "north shoulder" of the Battle of the Bulge between the American First Army and the German Sixth SS Panzer Army and Fifth Panzer Army. The heroic stand at St. Vith by 7th Armored Division, the "panzer graveyard" of Krinkelt, the destruction of 1st SS Panzer Division — it's all here, and more.

Elsenborn Ridge is a stand-alone game in the Panzer Grenadier series: You do not need any other game in the series to play any of the 35 scenarios. These include fierce tank battles and infantry actions, including the failed drive of Jochen Peiper's battle group toward the Meuse River, 3rd Armored Division's destruction of 2nd SS Panzer Division, the American stand along Elsenborn Ridge and the collapse of the 106th Infantry Division.