A Time for Trumpets: The Battle of the Bulge, December 1944 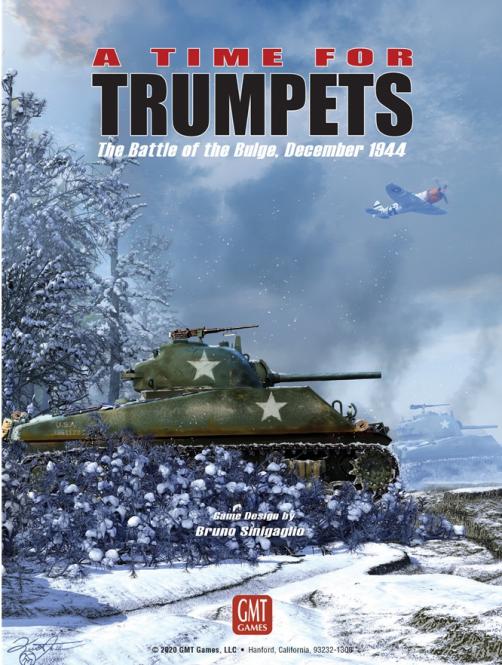 A Time for Trumpets (ATFT) is a battalion level game of the Battle of the Bulge. The game system incorporates a number of concepts from two the highly playable games on the same subject: Bitter Woods by The Avalon Hill Game Company and the iconic battalion level Wacht am Rhein from SPI in 1977. In addition, the command and control concepts devised for the TAHGC version of The Siege of Jerusalem were utilized.

Most of the ground combat units in “ATFT” are battalion sized combat units. The battalion is homogeneous with regard to mission and functionality. Homogeneous, because an infantry battalion is comprised primarily of infantry companies, a tank battalion is comprised primarily of tank companies, etc. A battalion based game is designed with differentiation inherent to the system, whereas a regimental level game is designed with integration inherent to the system. For example, in a battalion level game, Kampfgruppe Peiper will include at least two separate panzer battalions, a panzer grenadier battalion, an AA battalion and an artillery battalion; whereas in a regimental level game, KGP will be comprised of one counter representing all of the aforementioned units.

The Divisional compositions include HQ, the front line battalions and the combat support battalions: recon, engineers, anti-tank, anti-aircraft and artillery. The individual field battalions perform game functions that attempt to simulate the battlefield actions of their real-life models. The aircraft squadrons include those that were most numerous over the battlefield in December 1944: P47, B26, ME109, JU88 and ME262.

Front line battalions are the primary forces that try to wrest territory from the enemy, while also being assigned to prevent the enemy from doing likewise. Armored recon units function as cavalry, which is a difficult proposition given the weapons employed. Engineers perform the specialized missions that can only be approximated in higher level. In addition to lending their expertise to direct combat in a combined arms fashion, they construct strong defensive positions and bridges, and of course, they blow things up. Anti-tank units provide a strong backbone to defensive positions while still possessing a moderate offensive potential. Light anti-aircraft provides defense against aircraft while effectively creating problems for enemy infantry not supported by tanks. Heavy anti-aircraft provides enhanced defense against aircraft while stiffening resistance against enemy tanks. Last, but not least, conventional field artillery (FA) and massed German rocket artillery (NW) rules the battlefield when they are able to achieve local superiority.

In order to maintain the combat Divisions and Brigades as cohesive and compact entities, the successful command and control concepts similar to those of Wacht Am Rhein 1977 have been utilized. Division/Brigade combats units must be in Command Range of their HQ, while their HQ must be in Command Range of their Corps HQ, etc. Much effort has been expended to make this system easy to play. Every formation has been color-coded, so that visual segregation and recognition are immediately obvious.

The game map is at the scale of one hex equals a mile and was developed using the 1-50,000 1943-1944 GSGS 4040 and GSGS 4507 topographical maps. Players will easily recognize the influence of the Bitter Woods game map as terrain is easily recognized and differentiated.

Extensive research using the most modern sources available has assured an accurate and complete Order of Battle. Also included are optional random events that will provide additional challenges for those inclined. Scenarios will include the Campaign Game, 6th Panzer Army, 5th Panzer Army, 7th Army, Patton's Relief of Bastogne, and the Race to the Meuse.