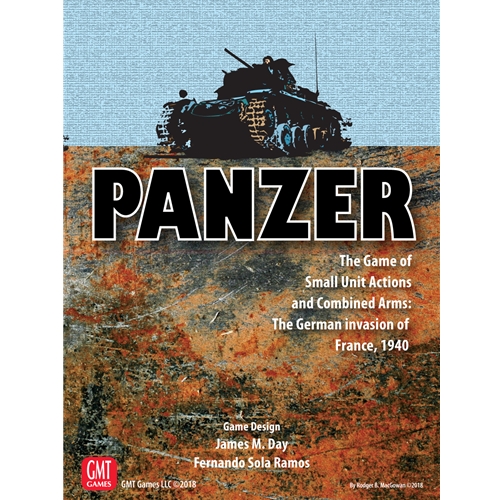 IMPORTANT NOTE: In order to play this expansion, you will need a copy of the Panzer base game; ownership of Panzer Expansions 1, 2 or 3 is NOT required.

This expansion set includes the most significant French forces that saw action on the Western front in 1940. Also included are the German forces that invaded France and the Low Countries, flanked the Maginot Line, and finally pushed on into France. The playbook includes rules for special units, new optional rules for Staggered Initiative, Command Span, and others, 12 riveting scenarios (including 2 historical scenarios depicting the fierce battle for Stonne), and unit summaries for the French and German units.

Ownership of Expansions 1, 2 or 3 is not required to field the German forces, they are all here including the STuG IIIA and Hs 123A-1 aircraft, which were not previously available. This expands on those German units included in the first three expansions – no unit IDs are duplicated. Combine the German units from all of the expansions to create customized scenarios on either the Western or Eastern Front.

The TO&Es booklet includes details for the French and German forces covering the 1940 period, including the five major divisions from the cavalry and infantry arms of the French Army, including the Mechanized Light Division (DLM – Division Légère Méchanique) and the Armored Division (DCR – Division Cuirassée de Réserve). German forces include panzer, motorized infantry and infantry divisions, as well as the Grossdeutschland (mot) Infantry Regiment.