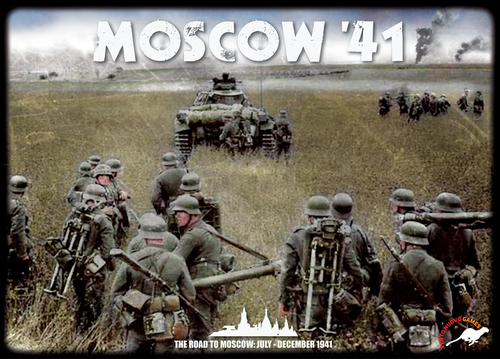 MOSCOW '41 : is a wargame covering the most decisive campain of WWII: the German drive on Moscow. Although based on a historical event, the players in command of the two sides can modify the course of History. The game is recommended for two players, but has excellent solitaire suitability.

HISTORICAL INTRODUCTION
In December of 1940, when Hitler made the decision to invade Russia and set the date for the middle of 1941, he was confident that the Soviet regime would collapse under an uncompromising assault. Initially, the operation - codenamed Barbarossa - succeeded beyond Hitler's wildest dreams. Within a day, the Russian Air Force was destroyed on the ground, then vast inroads were made on all fronts accompanied by large scale surrenders of encircled Russian troops. By 15th July, von Bock's Army Group Centre with its 48 Divisions, of which nine were armoured, and backed by Kesserling's Second Luftflotte, had reached Smolensk. This was two-thirds of the way to Moscow and it seemed that nothing could stop the Panzers from blowing up the Kremlin within another three or four weeks... or could something stand in their way?

THE GAME
MOSCOW ‘41 is a wargame covering the German Army Group Centre offensive aimed to seize Moscow, after having successfully defeated several Soviet armies in the great encirclement battles at the frontier and established two bridgeheads on the Dnieper.
Although based on a historical event, the two players can modify the course of the operations, with the German player trying to achieve a decisive victory before the winter comes, and the Soviet player playing a fighting withdrawal, while waiting for Reinforcements and until ready to strike a decisive blow at the invaders.
The game is recommended for two players, but has excellent solitaire suitability.