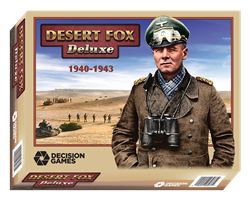 The North African campaign lasted for almost three years. For most of it, armies chased one another back and forth through the deserts of Egypt and Libya, gaining a temporary advantage only to stall as supplies lines stretched. The Allies finally gained the upper hand in the desert just as a massive Anglo-American invasion hit French North Africa. The fighting shifted to the mountains of Tunisia, where the Axis dreams of an African empire finally died.

Desert Fox Deluxe covers the campaign from the Italian invasion of Egypt in 1940 to the final clearance of Africa in 1943. One player commands the Axis forces, the other the Allies. The Axis seeks to maintain a presence in North Africa while the Allies fight to eliminate it. Six maps cover the battlefields from Algiers to Alexandria at 10 miles to the hex. Each turn represents one month of real time. Combat units are regiments or brigades, with some divisions and specialist battalions.

Each turn, the active player maneuvers units and initiates combat, while their opponent reacts. Supply is critical; players must move supplies and replacements from the sparse ports by truck to the front lines. It can take several quiet turns to build up units and supplies for a major attack, reflecting the ebb and flow of the desert war. Units cover ground fast except when in close proximity to the enemy. Combat strength is enhanced by weapons, supporting fire, air power, and special tactics.

Special events — some triggered by players, others happening automatically — alter the availability of reinforcements and supplies, or demand player action. Reinforcements come at a cost in time: shortening the game for the Allies, lengthening it for the Axis.

Desert Fox Deluxe is a combined version of the games Desert Fox and Trail of the Fox, along with the prequel Fox Killed variant, and the Torch/Algeria extension. It upgrades the events to display cards, expands the display map and includes extensive support materials to provide a comprehensive simulation and study of the campaign for North Africa.

Desert Fox Deluxe gives both sides plenty of opportunities to exploit and dangers to overcome.