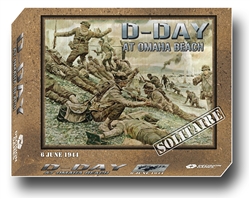 D-Day at Omaha Beach recreates America’s most bloody and heroic day of World War II. In this solitaire game from the designer of the solo classics RAF and Ambush, you control the forces of the US 1st and 29th Divisions landing under fire on the Normandy shore, and struggling desperately to establish a viable beachhead. The game is also great for two players playing cooperatively, each controlling one US division.