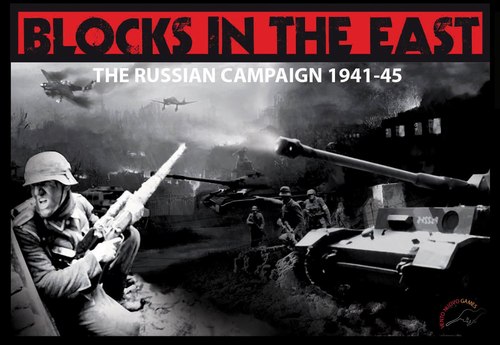 Blocks in the East is VentoNuovo’s first and best-selling game. It offers gamers the full scope of the gigantic “Eastern Front” from 1941 to 1945, with different rules levels that allow players to dial up just how much complexity they want to use, and scenario times varying from a short 2 hours to 6 hours and up for the full campaign.  Precision-made blocks and colorful stickers are used to represent the major units involved and keep track of their strength or losses, providing a “fog of war” element that adds to the excitement.

SCALE
A hexagon is approximately 42 miles (72 km) across.
A game turn is equal to 1 month of battles.
A full strength block represents a major military formation (normally a corps) of about 30.000 men, 300 Tanks, or 300 planes - depending on the unit type, equipment, nationality, etc.

With over 600 wooden/plastic components a full laminated multicolor 125x87 cm mapboard, (made from two map sheets), Blocks in the East truly offers the scope to capture a sense of the biggest and most prolonged campaign in world history.

With over 300 unit counters and 300 different resource points of various colors, players can enjoy hours of fun by playing the full Codeword Dortmund campaign from 1941 to 1945 or by playing one of the other scenarios. Each scenario has a different difficulty level, rated in brackets from 1 (Very Easy) to 10 (Very Hard):

RULES LEVELS
The rules are divided into three major sections which can be learned one at a time:

- BASIC GAME RULES: The first section introduces the basic concepts and allows  players to start playing the game quickly, without too many rules to remember. The shorter scenarios are especially developed for these rules and to learn the game's mechanics.

- ADVANCED GAME RULES:  Provide more specific and detailed rules for an enhanced sense of realism and challenge, such as Fuel Consumption and Advanced Production. The long scenarios are richer when played with these rules.

- OPTIONAL RULES: For those players who want to get the best out of the game, these additional rules can be added as desired.  Pick some or all of them- you decide! They include Technology Research, Strategic Warfare with bombers and submarines, Partisans, Amphibious Landings, Airborne Assaults, Special Attack Actions, and more!

BLOCKS IN THE EAST can be played standalone or combined with Blocks in the West and Blocks in Afrika.

Components of the BOXED STANDARD EDITION

On 22 June 1941, under the code word Dortmund, the German Wehrmacht and other Axis powers started the invasion of the Soviet Union ("Operation Barbarossa") and thereby the biggest struggle in military history.

For the next four years, this titanic struggle between “superpowers” would swallow men by the millions and vast waves of equipment and supplies, with campaigns stretching across hundreds of miles. From sandy, near-desert like plains to frozen hinterlands near the Arctic, the War in the East would surpass everything that has happened before or since in scope and destruction.

Blocks in the East gives players the chance to fully explore this incredible situation.

We would also point out that our “Blocks in Afrika” game covers not only that continent and WW2 in the Mediterranean, but also includes parts and rules for expanding Blocks in the East and Blocks in the West into “Blocks in Europe,” a gigantic simulation of the entire war, AND also includes blocks and scenarios for other situations within Europe, such as the German/Soviet invasion of Poland or a “could have happened” Soviet invasion of Sweden.