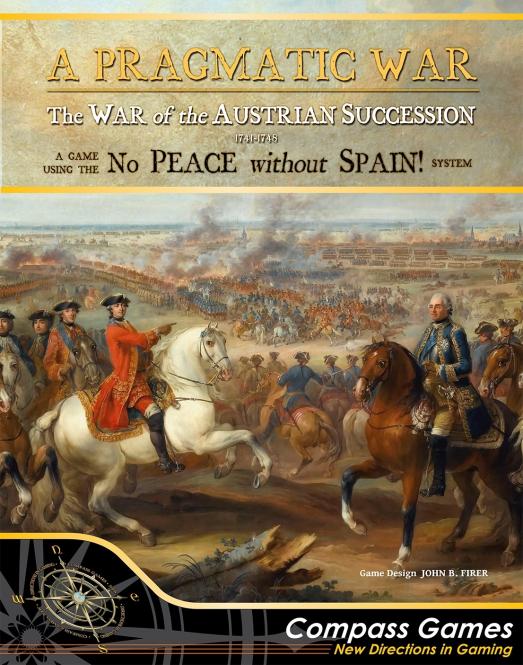 A Pragmatic War: The War of the Austrian Succession 1741 – 1748 is a two-player game simulating the War of the Austrian Succession. One player represents the Austrian interest represented by the Austrians and those powers in Europe faithful to the original agreement, (“the Pragmatic Alliance”). The other player represents the challengers to the Austrians, the Bavarian rival for the Imperial title, Charles Albert and his supporters, primarily the Bourbon rulers of France and Spain intermittently joined by Prussia (“the Bourbons”). The war like its predecessor, the War of the Spanish Succession was fought primarily to determine who would succeed to the throne of a great empire, in this case the Austrian Empire. When the current ruler of the Austrian crown lands and Emperor of the Holy Roman Empire, Charles VI died without male issue he had laid the groundwork for his eldest daughter Maria Theresa to succeed to the Hapsburg crown lands.  Known as the “Pragmatic Sanction”, this diplomatic effort obtained the agreement of the leading powers of Europe to her accession to the Hapsburg dominions and the election of her paramour as the next Holy Roman Emperor. However, with the opportunistic seizure of Silesia by the young Frederick the Great of Prussia, the agreement unraveled and the war began.  In time, it would involve virtually all of Europe.

A Pragmatic War continues the series pioneered and excellently portrayed by Don Herndon’s No Peace Without Spain! and expanded upon by Nine Years: War of the Grand Alliance 1688-1697.  The basic NPWS system is ported to APW but expanded and adapted to include such period-specific features as: