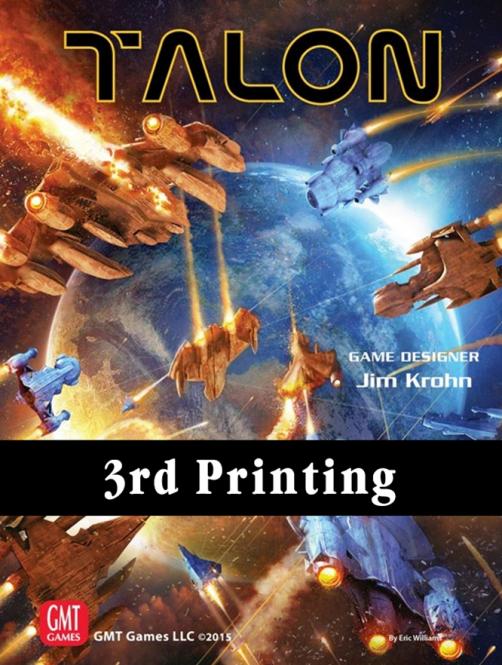 Talon is a tactical game of space fleet combat between the Terran Confederation and the invading Talonthincanthanadu (Talon) Empire.

Long hampered by cost and beset by international problems, real space exploration did not seem possible for humanity.  Amazing technological breakthroughs would change all of that in the year 2112.  The invention of the Near Faster Than Light (NFTL) drive would make it possible for large ships to move easily in and out of a planet’s gravity well, and to travel quickly within the confines of a solar system.  Ten years later, the perfecting of the Faster Than Light (FTL) drive would turn the galaxy into an open canvas.  United by a common purpose, the newly formed Terran Confederation spread its wings and began to paint their picture.  Expansion led to colonies, research stations, and even more technological discoveries, but it also led to the realization that they were not alone.  Although no sentient, alien species had been encountered, long range scanners had picked up the distinctive signatures of FTL drives.  Sentient races must exist…and they must be space faring.  Terran expansion stopped.  Not knowing what to expect, a period of consolidation followed which emphasized defensive technologies and fleet building.  First contact was made with the Talonthincanthanadu in 2227, although the people of earth would just call them the Talons.  The shortening of the name made sense, not only for convenience, but because the Talon Empire swooped in very mush like a raptor upon the fledgling Terran Confederation.


Space combat games have been done before.  What sets this game apart?

Fleet Combat:  This is a game of fleet combat.  Battles with individual ships can be fought, but the game has been designed to be able to easily handle combat with fleets of 3-10 ships.  The system would have to be very simple and elegant to handle that smoothly - more on that later...

Capital Ships:  This is NOT a game about fighter combat in space.  The ships in the game, for the most part, are large ships that have shields, have to charge systems, and maneuver - not just do an Immelman.

Simplicity:  The game accurately captures the feel of science fiction space combat as seen in the major sci-fi franchises, but it does so very simply.  The play test rules, including all the advanced rules, are only 8 pages long, and that includes a lot of "historical" explanations and setting of the conflict.

Quickness:  Small fleet scenarios can be played in an hour, larger ones in less than two.  More on that later...

Power Curve:  Each ship class has a specific "Power Curve".  All of the energy use for basic systems for the ship are already baked into the Power Curve.  All a player has to do is adjust the speed of the ship (and there are limits up and down on how much can be adjusted), and the power curve gives the turn radius for the ship and how much additional power is available.  This power can be spent as it becomes available throughout a turn to do things like:  charge a weapon faster than normal, reinforce a shield, turn the ship faster than normal, etc. depending on the needs of the situation.  The game represents tactical combat that is happening very quickly.  This rule has each player making quick decisions on the fly as power becomes available instead of planning out a turn in great detail ahead of time.

Map not Miniatures:  This decision is larger than you might think at first glance.  In some ways, this game has concepts that would be right at home in a miniatures game, but I definitely wanted this to be played on a map.  When dealing with firing arcs and distances moved, just a small change, bump of the card or miniature, etc. can have a dramatic impact on game play.  There is a reason why games like that are sometimes umpired.  With the game being hex and counter, everything is very distinct, the rules are simpler, and movement is quick.  The map allows the game to be played so much faster.

Large, Laminated Counters:  This is perhaps the most innovative part of the game.  The counters in this game are hexagonal shaped, laminated, and very large (the hexes in the game are roughly the size of a hex in Space Empires).  The largeness of the counter allows all of a ship's systems to be displayed right on the map and the lamination allows the player to mark damage right on the counter with a dry erase marker.  Being able to see everything right on the map allows the game system to handle a much larger number of ships without confusion and without a lot of effort.  For those of you who are old school and do not want to write on the counters, logsheets will be provided.

2-4 Players:  While designed as a 2 player game, the fleet nature of the combat allows the game to be easily played with more players.  Depending on the scenario, different parts of a fleet are controlled by different people in a multi-player game.

Scenarios and Design Your Own:  While the game comes with 10 scenarios that tell the story of the war between the Terrans and the Talon Empire, each ship has a point value to make it easy to do design your own scenarios.

How does this all tie together?

Games that do space fleet combat often have to super simplify the capabilities of a ship and the damage it can take (making it more like a fighter) or have large log sheets and cards that have to be referenced for each ship, making it very cumbersome to handle large fleets.  This game allows you to have your cake and eat it too.  By having all of the information on a ship displayed directly on the counter, the size of the fleet almost does not matter.  The game is very visual and everything can be seen on the map.

By giving each ship a Power Curve, it eliminated detailed and unrealistic long term planning, kept the game simple, and yet still allowed a player to prioritize what systems would be powered for each ship.  By using a map and not miniatures the movement became very simple and quick.

All of this tied together to make a game that was very thematic, very quick, had a lot of meaningful decisions, and was very fun.  Despite the subject, this game will not burn your brain, but will make you agonize over choices.

Other cool things under construction

There are a couple of things under development at the moment.  They are not part of the game yet, but hopefully will be finished and polished before the game is produced:

Campaign Game:  A campaign game is being designed with a very simplified strategic rules system which will allow you to manage an empire and assign ships to fight in different sectors of the Terran-Talon conflict.  These rules will have nothing to do with Space Empires and will be set strictly in the Talon game universe.