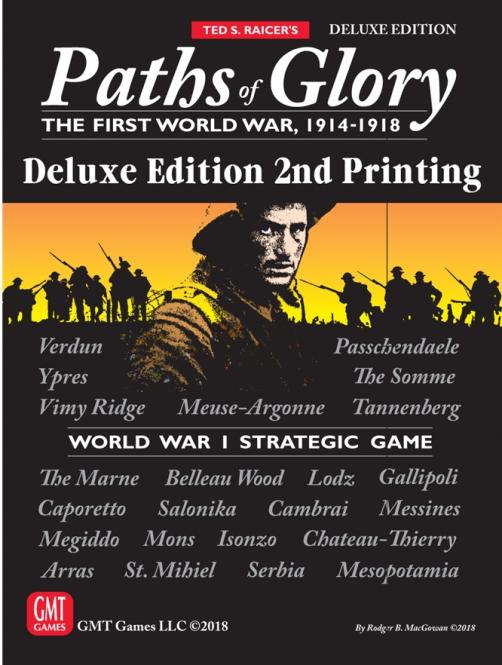 They called it the Great War. In over four years of titanic struggle, the ancient Europe of Kings and Emperors tore itself to pieces, giving birth to our own violent modern age. The bloody battles fought in the trenches of the Western Front, the icy plains of Poland, the mountains of the Balkans, and the deserts of Arabia, shaped the world we know today. We are all orphans of the Great War.

Paths of Glory: The First World War, designed by six-time Charles S. Roberts awards winner,Ted Raicer, allows players to step into the shoes of the monarchs and marshals who triumphed and bungled from 1914 to 1918. As the Central Powers you must use the advantage of interior lines and the fighting skill of the Imperial German Army to win your rightful 'place in the sun.' As the Entente Powers (Allies) you must bring your greater numbers to bear to put an end to German militarism and ensure this is the war 'to end all wars.' Both players will find their generalship and strategic abilities put to the test as Paths of Glory's innovative game systems let you recreate all the dramatic events of World War I.