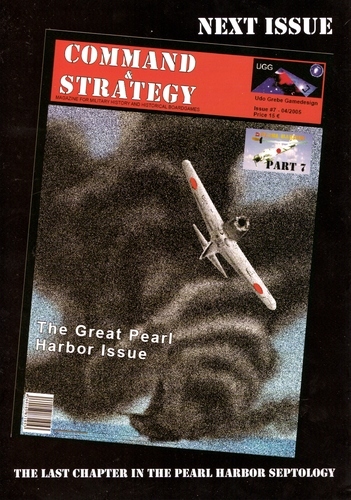 Pearl Harbor features the "China Incident", a limited war of Japan against China, which eventually develops into a full scale war. Step by step the diplomatic relations between Japan and the USA worsen. This first leads to diplomatic and economical pressure of the USA against Japan. Finally Japan opens the struggle for a Pacific Empire of the Rising Sun with its surprise attack on Pearl Harbor.

September 1939
Since July 1937 a war between Japan and China rages, unlike in Europe a mere partisan and guerrilla war. Will the USSR interfere? Will Japan go for the Pacific, or wage a full scale war against China? Or will Japan help the Axis in wearing down the USSR?

June 1941
The Axis has assaulted the USSR in the ETO. Will Japan join in or stick to its non aggression pact with the USSR? Japan and the USSR have more time to prepare for the inevitable war against each other. Will Japan operate even better than historical? Or will the USA be able to repel the Japanese assaults?

Pearl Harbor Dec 1941
December 7 1941. The Japanese aircraft carrier elite is on its way for a surprise strike against the US Naval base Pearl Harbor, Honolulu, Hawaii. Will the US Navy been crippled for months?
At the same time Japan launches a series of Invasions against the Philippines, the Netherlands' East Indies and other important islands.
With this infamous attack Japan wakes the industrial giant USA ...

Each of the scenarios can be used as a starting point for a full PTO game till 1945. Pearl Harbor uses the same system as its predecessors Morse code..._, Triumph & Fall of the Desert Fox, and Cold Days in Hell. Together with these ETO games Pearl Harbor can be combined into a true MEGA game of WWII