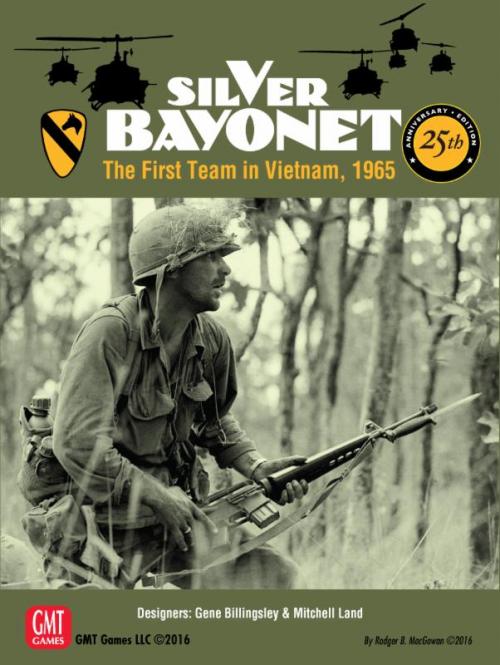 Gene and Mitch Land, his co-designer on this project, are giving the original Silver Bayonet a major facelift for this 25th Anniversary Special Edition.  Specifically....

The Map. This will be a major upgrade to the original, in terms of map accuracy, map art, and physical products. Gene and Mitch are working now, poring over period maps that were still classified back in 1989-90, to create their best possible take on the terrain in and around the Ia Drang Valley southwest of Pleiku. Among other upgrades, you'll see new terrain types that represent the broken terrain, light jungle, and waist-high plateau grass of the region. We'll also be using slightly larger hexes.


All that new map analysis will be rendered beautifully by our map artists Mark Simonitch and Charlie Kibler, so you guys are going to get a visual treat to go with a more accurate and representative game map.

In terms of production, this will be a mounted map of the same quality as our COIN Series and CDG mounted maps. This will not be standard for the ongoing Operational Series of games (see InsideGMT article for more detail on that), but for this one-time Anniversary Edition, we’re giving you guys a primo package.

The Counters. First off, we're increasing the counter size in this version to 9/16" counters, an improvement on both the visual and tacticle fronts. And we are adding a few new counters, including several HQs and two leader counters. We are also reworking the mix of markers and adding quite a few to handle better tracking and some new game functions. As with the maps, the counters will also get a major art upgrade and will be produced on the high quality, rounded edge counters you guys are used to from our COIN games, CDGS, and Euros. Just to give you a sense of the art difference even at this playtest stage, here’s a look at a few of the original game counters verses a REALLY ROUGH PLAYTEST VERSION that Mitch made up a couple of weeks ago.

The Game System. This will be very familiar to all of you players of our Operational Series games. You might remember that when we produced Operation Mercury (the 4th game in the Operational Series), we streamlined and upgraded the system used in the original three games a bit. Gene and Mitch used that streamlined rules set as a starting point with this new version of Silver Bayonet, and continue to clarify and improve the rules and system as playtesting progresses.

Scenarios. There will be 14 scenarios in this package, all of them re-evaluated and reworked as a result of our re-study of the campaign and its battles.