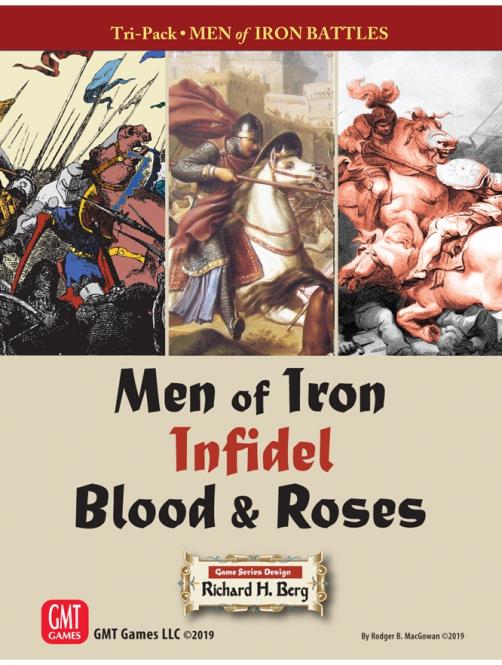 Back by popular demand, the first three games in the Men of Iron series: Men of Iron, Infidel, and Blood & Roses. But wait, that’s not all you get, we’re throwing in the Battle of Agincourt from C3i #22.

The game that started it all, Men of Iron, covers the re-emergence of infantry in the early 14th century, along with a more perceptive understanding of the value of combined-arms warfare and the effective use of defensive terrain. The scenarios highlight the key elements that made these battles so fascinating: the defensive power of the longbow, especially when used in coordination with dismounted, or even mounted, men-at-arms. Agincourt  covers Henry V’s famous victory during the Hundred Years War.

The second volume in the  Men of Iron series, Infidel, focuses on the major battles of the early Crusades era between Christians and the Muslims. This is a period that saw cavalry reign supreme and pitted the European mounted, armored men-at-arms - which relied on furious and direct charges with sword and lance - against the Eastern European/Turkish light cavalry tactics - focusing on the efficiency of its mounted archers.

Blood & Rosesfocuses on the battles of the Wars of the Roses in England, between 1455 and 1487. This was warfare in which most men were truly "of iron", heavily and totally armored to such a point that their mobility was suspect. It also featured the introduction of gunpowder – mostly field artillery – in noticeable numbers. And while many English men-at-arms were mounted, they did so almost entirely for transport. Most fighting was on foot … and it was quite vicious.

The series is designed for quick learning and easy play. Game rules are short, there are no turns - play is continual, with opportunities to steal play from your opponent - and combat resolution is a single dieroll. Playing time is about 1-to-3 hours per battle.


The series is also for the gamer who enjoys playing solitaire. The system is designed for both individual and face-to-face play without any loss in insight or fun. It allows a player or players to see what happened in these famous battles and why. There are no purpose-built solitaire rules, but many players play that way.


The battles included in the Men of Iron tri-pack are:

Infidel, Blood & Roses, and The Men of Iron Tri-Pack developed by Ralph Shelton.