Invasion 1066: The Battle of Hastings 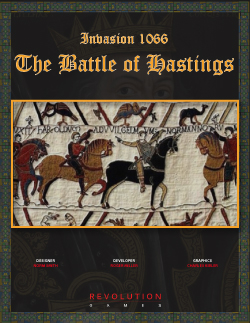 Invasion 1066: The Battle of Hastings is our exciting new game designed by Norm Smith. Originally published as Senlac Hill by Saxon Games, we have enhanced this great design by developing the rule set even further and providing new artwork by industry veteran Charles Kibler.

Can you as William the Conqueror become King of England? Or will Harold deny the invader and keep his throne? Map scale is 50 meters per hex and the units vary in size from 100 to 250 men. The game is quick-playing and bloody with easy to understand mechanics. Historical touches such as cavalry charges, army morale by troop type, leader loss, arrow supply, Saxon javelins, the Papal banner; it is all here in a very easy to play package. The game is available for pre-order now and should ship in late May. Attending Consimworld Expo? We will have the game for sale onsite there at the Revolution Games booth along with all of our other games as well.

The second game in the series Invasion 1066: The battle of Stamford Bridge should be released later this year or early next year. Vikings versus Saxons in a wild wide open game.