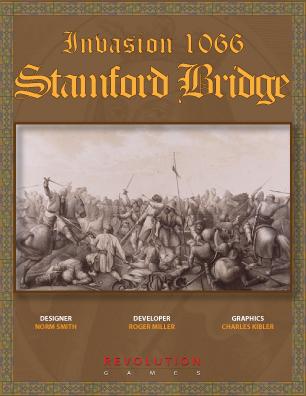 Invasion 1066: Stamford Bridge  is the second game in the Invasion 1066 series designed by Norm Smith. Originally published as Orri's Storm by Saxon Games, we have enhanced this great design by developing the rule set even further and providing new artwork by industry veteran Charles Kibler.

Just days after defeating an English army at Gate Fulford, Harald Hardrada, the Viking warrior king is caught by surprise at Stamford Bridge by a second English army.

Map scale is 50 meters per hex and the units vary in size from 100 to 250 men. The game is quick-playing and bloody with easy to understand mechanics. Historical touches such as berserker rage, Orri's storm, viking shield wall, army morale by troop type, leader loss, and arrow supply; it is all here in a very easy to play package.