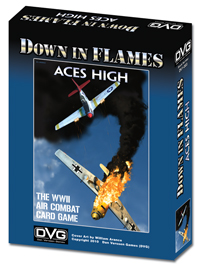 Down In Flames places each player in the cockpit of a fighter as they enter combat against other aircraft. By playing cards, you gain advantageous positions on your targets, fire your guns, and send them down in flames!

The game is based on a unique action-reaction card mechanic. Each card can be countered by specific other cards. At the bottom of every card is the list of cards it is allowed to cancel. This makes for exciting card play back and forth between players…

The air combat is simulated using a Positioning system that allows aircraft to be Advantaged, Tailing, Disadvantaged, or Tailed in relation to other aircraft. An aircraft’s position determine if it can aircraft, and how many bonus Bursts it receives if it is Advantaged or Tailing.

The game uses a simple Altitude system to add this vital aspect of air combat. Aircraft get to draw cards when diving, and must discard cards when climbing.

The game also includes Light, Medium, and Heavy Bombers that are used in the historical campaign games.

Down In Flames has won several awards through the years and continues to be a favorite for both serious and casual gamers.

What’s New?
In other words, “Why should I buy this game, since I already own the old ones?”

Bursts has been further detailed as Bursts and Damage In the original game, aircraft had their firepower rated by Bursts. This was a measure of how much “ammo weight” an aircraft could throw out. Such a simplified system, also led to some clumping of capabilities. For example, an aircraft with lots of light machine guns (ie the Spitfire I) and an aircraft with a few medium sized cannons (ie the Bf-109E) both received a Burst rating of “1”.

Note also how both aircraft still net out to a total Bursts and Damage value of “1”. The updated system gives more detail to the aircraft without changing their power balance.

Action Cards
Maneuvering (changing your position relative to an enemy fighter) is a vital part of DIF. However, this was often an area of frustration in the original game when a player didn’t have the cards to maneuver on an opponent, or maneuver away from an opponent.

The updated system neatly solves that problem. There are no dedicated Maneuvering or Half Loop cards in the deck. In addition to its normal function, every action card has a Maneuvering rating of from 0 to 4. You get to choose how you play each of your cards. When you play a Maneuvering card that is not stopped, you get to adjust your aircraft’s position equal to the card’s Maneuvering value. A “Maneuvering 2” would move you from Neutral to Tailing.

The rarity of the different Maneuver values is associated with the different card types. For example: a Barrel Roll has a value of 0, Scissors has a 1, Out of the Sun 2 for 3 has a 2, Vertical Roll has a 3, and Ace Pilot has a 4.

This means you can go from being tailed to tailing all in one card, but it will cost you an Ace Pilot to do it, and your attempt might get stopped.

A second change is the cards each card will Respond to. The original game had very limited Response chains, which made for very repetitive game play. The new version has a lot more variety, and thus decision-making.

Skill-Based Campaigns
In the original game, a campaign’s outcome was determined to a fair degree by lucky card draws during Flak and Bombing. For example, during a mission it is my job to escort my bombers to the target so they can bomb it. During the game, I do a wonderful job and I get all my bombers safely to the target. The defender then flips over Flak cards and gets lucky flips. My bombers can be damaged or even destroyed and I can do nothing about it. I then flip cards to determine my bombing accuracy. If I get bad cards, my mission will end in failure, and there’s nothing I can do about it.

Did missions ever happen this way in real life? Sure, but it’s no fun to make good decisions in a game for an hour, only to have a couple random card draws undo all your hard work

The new system takes out random events like Flak and Bombing accuracy. Your success is based on the parts of the mission you have control over.

Artwork
When the first 2 DIF games were published, full color printing was very expensive and couldn’t be worked into the budget. As a result, the game was made using 3 colors: Black, Blue, and Red. The second 2 games were produced many years later and the cost of color printing had dropped, so those cards were made in full color. As a result, the cards do not have a unified look.

The new game will be printed using full color printing.

DIF Community
This is still in the planning stages, but we’d like to have a page on our website devoted to player submitted campaigns and optional rules. Players would receive name credit for their submissions.

Aces High keeps the pricing very reasonable, and features far more cards than have ever appeared in a DIF game before. Most of the previous games had around 120 to 150 cards. This game has 220 cards!