Previous product Product 70 of 193 Next product 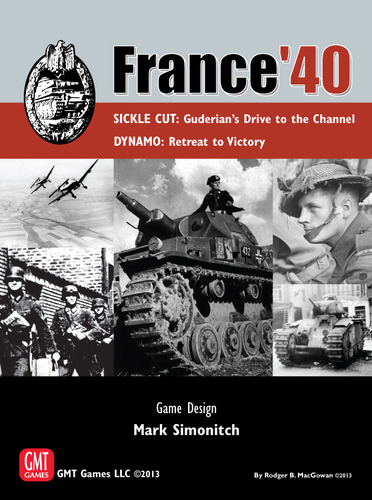 France '40  covers the crucial 10 days in May, 1940 when the German army broke the French line on the Meuse and raced to the sea at Abbeville. The daring sickle-like-cut across France cut off the BEF from their bases in Normandy and also trapped the French 1st and 7th Armies in Picardy. The French high-command became paralyzed and failed to counterattack. The British saw the situation was hopeless and headed for Dunkirk. It doomed France.

The game starts on May 13th, the third day of Case Yellow. Six panzer divisions are already through the Ardennes and at the Meuse River. The French and British have already raced through Belgium to reach the Dyle Line and cover the Gembloux Gap. The stage is set. Can the Germans cross the Meuse in front of strong opposition? And if they can, will they be able to break out from the bridgeheads? And if they can do that, their advance across the map is threatened as Allied reinforcements pour in from the north (mainly British) and south (French). Most reinforcements are determined randomly so the German player never knows what to expect on his flanks.