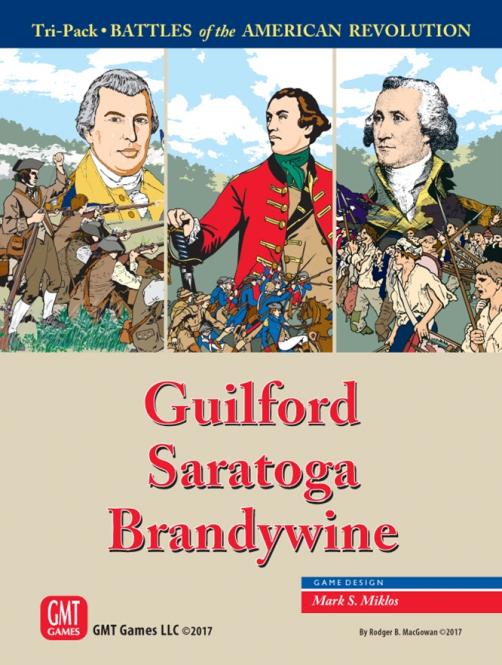 In order to get several of the popular AmRev series games back in print, we are offering an American Revolution Tri-Pack. This all-in-one boxed package is composed of new editions of the flagship game in the series -Saratoga, the long-out-of-print Brandywine, and Guilford/Eutaw Springs. Below is more detail on exactly what you’ll find in the package. As you’ll note, there are considerable additions and changes from the original games, as designer Mark Miklos has endeavored to create and update the finest version of these games that we’ve produced to date. Plus, the package includes double-sidedmounted maps for all four battles!

Note that we are not offering an update kit for these games, except as follows:

For those who want to keep their P500 Reprint order for Brandywine only instead of ordering this Tri-Pack, we will honor those orders with a “white box version” of Brandywine (we just can’t get a cost-effective printed box made for only couple hundred orders) that includes all the new internal components including the mounted map for a reduced P500 price of $27 P500. We will not offer this long-term, but we want to make sure that we take care of anyone who has a P500 order in for Brandywine and only wants that battle.

Wee’ll be printing some extras of the 4th Countersheet (series markers, etc), which we will make available for on P500 for $5 + shipping.

Here are the specific updates for each battle: