Previous product Product 22 of 39 Next product 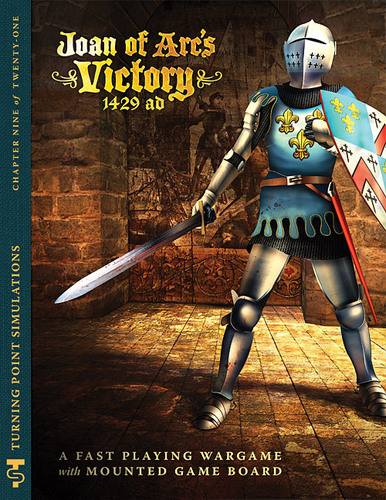 Render to The Maid!

Even in full armor, she still looked like a young girl.

Even among men who had done nothing but war all their lives, she maintained a soldierly bearing... and something else. She led that army to victory, confidently sending the English commander her demand,

"Render to the Maid, sent by God, the King of Heaven, all the good towns you have taken and violated in France."

Turning Point Simulations gives you the chance to delve into the mystery of the Maid and the making of France, with a rendition of the chaotic slice of the Hundred Years era when the biggest question was just how many separate countries "France" might become.

Joan of Arc's Victory: Render to the Maid! covers the entire campaign of the siege and relief of Orleans, with one-month turns beginning in April, 1429.  The French player must consolidate his polyglot army and its inspiring leader, while dealing with Joan's "voices" via an events table that leaves him feeling slightly out of control.  The English player has to deal with Scots and herrings and trying to resist the "help" of an unwanted Burgundian ally.  Both players face the challenges of making siege and open-field combat work for them, in an era where artillery and charges by armored knights belong on the same battlefield. The game includes 200 counters, a full-color, mounted mapboard, and all the charts you will need to keep your focus on the Maid.

Will the English make France little more than their "eastern counties," with a Balkanized set of small kingdoms?  Or will France become France?  The decision is yours, based on how you react to the "voices" that The Maid hears.

Joan of Arc's Victory includes a random "Joan Events" table that will render the French player a sense of the uncertainty being around someone divinely inspired might provide. And it keeps life interesting for the English too, as Joan may do something very unexpected (and have surprising combat benefits too!).

No two games will ever be alike.

That means straightforward rules, key insights into the history behind the game, and designs aimed at one-session conclusions and high replay value.