Previous product Product 30 of 36 Next product 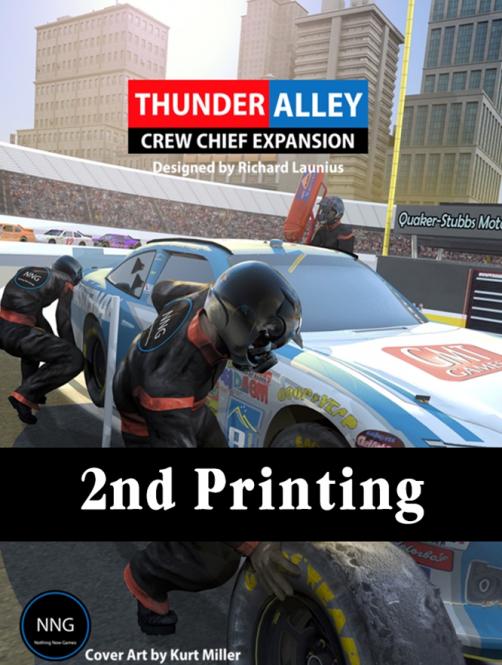 The Thunder Alley Crew Chief Expansion provides a new way to play Thunder Alley by adding strategic options which offset the luck of the draw and allow for more control over your team. The expansion contains 236 cards and is broken down into several sets:

CONDITIONAL CARDS (32 Cards): This set of 4 cards is added to each of Crew Chief Decks. They change the game slightly when each card is played. However the more people playing the same card on a turn increase the affect of the card. The “High Line” gives the player using it a +1 if they start beside the outside wall. But two players play “High Line”, both of them gain +2 movement on that turn as the track is really getting favorable in that groove. One aggressive team can make some fantastic moves, but multiple teams being aggressive will start to flare tempers and result in some metal on the racetrack.

CREW CHIEF CARDS (96 Cards): The expansion includes a set of 12 Crew Chief cards per player that are used each turn to tweak your strategy and take advantage of the cards in your hand. The eight Crew Chief decks consist of 12 cards and are the same for each player. Each turn players have three of those cards in front of them to choose from to make a strategy for the upcoming turn. Cards may provide ways to avoid wear or damage altogether. They may provide extra speed or strategies for pitting and restarts. Efficient use of these abilities in conjunction with your Race Cards can put your team in a very good position.

LAP CARDS (4 Cards): In addition 4 Lap Cards are included with the Crew Chief Cards which will allow for additional laps to be run and tracked. This is important for longer races on the existing tracks in conjunction with the new Track Cards listed below.

RACE TO THE FINISH CARDS (24 Cards): The race to the finish cards are a deck of 24 cards that replace the Point Tokens from Thunder Alley. They now provide larger cards that allow for easier visual identification of positions and points for each player. In addition, these cards enable you to add the “Lucky Dog” rule module to your games as each card has a method of elimination on it. So if your car was eliminated due to wear it goes on the "Eliminated” portion of the card. However if it was lapped it goes on the “Lapped” section of the card. On any future yellow flag, the car that was lapped and has the best position among those already lapped is put back into the race at the end of the line.

SETUP CARDS (32 Cards): Ever wish you had that draft card on the road course to get out of a tight jam? What about those times you looked at your hand searching for that Clean Air card on St. Adriana’s? Maybe you want that extra burst of speed but don’t want to over-tax your engine. The Setup Cards allow you to choose a card that you will get in your hand each and every turn during a race. There is a Draft Card, a Solo Card, a Lead Card and a Pursuit Card for each player. Each race you can choose one card for the race that you can use each turn and when you draw cards, it comes back to your hand.

TRACK CARDS (48 Cards) The Track Cards are intended to help make each game of Thunder Alley unique. Have you raced St. Adriana’s enough times to memorize the pot holes? Now instead of just racing on the St. Adriana Speedway, you can race in the Crackersmacks 500 for example, a race designed by other fans set on the familiar speedway but with unique twists and turns.