Previous product Product 97 of 195 Next product 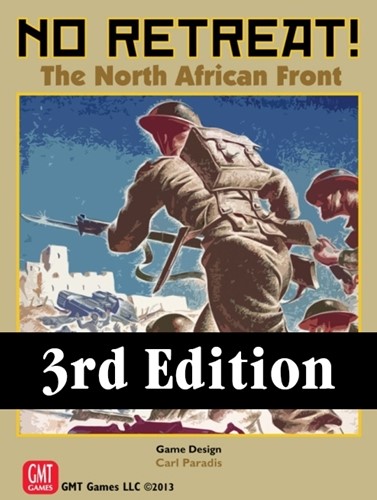 Following on the success of No Retreat: The Russian Front, where the Russian Front of World War II beckons, Victory Point Games' dynamic duo of game designer Carl Paradis and his trusty developer Alan Emrich have teamed up again to present the second chapter in this game series, No Retreat: The North African Front. This time they take the gaming action to the African Front, from the start of Operation Compass on 8 December 1940, through 1942 to the eviction of the Axis from Libya.

Building on the notion of a card assisted game and death-or-glory victory conditions, No Retreat: The North African Front offers a narrative game rich in the feel for the ebb-and-flow of the campaign, wrapped around an exciting maneuver and combat system that harkens back to the glory days of classic wargaming, but includes all the modern features and plenty of innovations. Unlike other North Africa wargames, there are 5 "mini-maps" located at the various termini of maneuver in the campaign, and where battles are waged as fascinating "mini-games" in their own right. Players try to sweep each map and force the action onto the next one in an effort to push their opponent out of the game.

The looming Malta factor is accounted for most assiduously. While abstracted into many aspects of the game, players must always be mindful of Malta being made active (helping the Allies) or inactive (assisting the Axis). The Italian forces have their rightful place in the story unfolding on the game board, and the remarkable paucity of units turns every counter and hex into the kind of wargaming puzzle reminiscent of the glory days of those great contests from the Avalon Hill General magazine.

The use of Supply Point markers, received in a fast, hassle-free way, to seize the initiative, replace losses and recover shattered formations, to light up a map and begin operations there (i.e., conduct player turns on it of maneuver and combat), and then to continue those player turns for another round. Each additional round of player turns must be paid for by another Supply Point, usually spent by the side that feels it is advantageous to press on and keep the opponent hard pressed, recreating simply and effectively the lulls and starts in battlefield operations that were a signature of this campaign.

The desert lies before you and World War II is at stake. You must endure and prevail under the most surprising and grueling of circumstances, for there is No Retreat!

No Retreat: The Invasion of Crete
This Bonus mini-game will allow you to refight the first airborne invasion in history, during May 1941. Each player will fight to gain or maintain control of the Island's critical 3 airfeilds. Time is of the essence here as each contestant has to manage his limited ressources in a life-or-death contest where neither has space to Retreat! This is a very intense knife-fight that can be very well be decided in the few first days, while the German Airborne force is most vulnerable, or could turn into a desperate rear-guard action, as the hard-pressed Allied troops try to escape the island. An innovative pre-game set-up planning procedure, and Airborne Landing rules, will insure that no two games play the same.

- Operation Compass, 1940: The British surprise offensive against the unprepared Italians in Lybia, pushing them back over 300 miles and capturing 115,000 prisoners! This scenario makes an excellent tutorial due to its low unit density. It is essentially a race game, with the Allies rushing to reach Map 2 and win the game there.

- Operation Sunflower, 1941: Rommel arrives in Africa with the 21st Panzer Division and begins operations to roll back the recent Allied advances, thanks to the withdrawal of their best troops to fight in Greece. Can you capture the important Port/Fortress of Tobruk, or will you to be stopped by the tenacious Australians?

- Operation Crusader, 1941: The importance of Tobruk and pressure from Malta on the Axis convoy routes to Africa caused both sides to fully commit to winning the war in the western desert during the British all-out attack to relieve the siege of the embattled Fortress. It's a wild free-for all battle, where speed of manoeuvre is all-important.

- Operation Venezia, 1942: After capturing Tobruk in this operation and routing the Allied forces in the desert (and the cancellation of the Malta Invasion), the German High Command sends resources to help Rommel’s exhausted forces race to Egypt. Can the forces of the Commonwealth hold the line at El-Alamein, or will the Afrika Corps reach Alexandria and the Suez Canal?

- Operation Lightfoot 1942: The last-ditch defence of Egypt and the resulting stalemate at El Alamein was finally turned to victory for the Allies as Monty’s overwhelming force pushed back the depleted and badly-supplied Axis Divisions. Or maybe Rommel will be able again to outmanoeuvre the British foe, and turn this battle of attrition into another of his famous victories?

- A Tournament Scenario 1941: For players that have time to play more than a scenario, but not enough for the full-fledged campaign game. Action starts with the first Rommel Attack of Operation Sunflower, and continues until Operation Crusader the end of 1941. Can the British keep Tobruk and Beghazi, or will the scenario end in an historical stalemate around Gazala?