Previous product Product 1284 of 1286 Next product 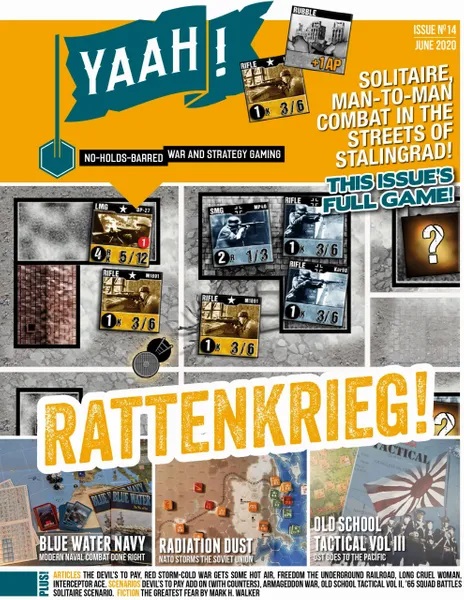 It's time for a new issue of Yaah! magazine. This issue comes with a spiffy new, man-to-man solitaire game from one of the best solitaire designers in the industry, Gottardo Zancani. Titled Rattenkreig, the game simulates up close and personal combat in Stalingrad, circa 1942. Rattenkreig features a robust AI bot, and an innovative way, based on the actual size of the counter, to calculate to where a unit may move.

Of course the gaming doesn't stop there. We have a complete The Devil's to Pay expansion with new counters! Find out what would have happened if either or both sides had additional troops the first day of Gettysburg. Yaah! #14 also includes a new solitaire scenario for '65 Squad Battles, another for Old School Tactical Vol 2, and an Armageddon War scenario to boot.

Articles? We've got your articles. There are pieces on numerous games, including Blue Water Navy, Red Storm, Freedom Underground Railroad, Old School Tactical Vol 3, Long Cruel Woman, Radiation Dust, Interceptor Ace, U-Boot, The Devil's to Pay, and the usual column by Peter Perla. Finally there's a World War III short story by Mark Walker titled, The Greatest Fear. Read along as two soldiers find out that neither the attacking Soviets nor a zombie horde is their greatest fear.

It's 74 pages of gaming and reading fun.