Previous product Product 897 of 932 Next product 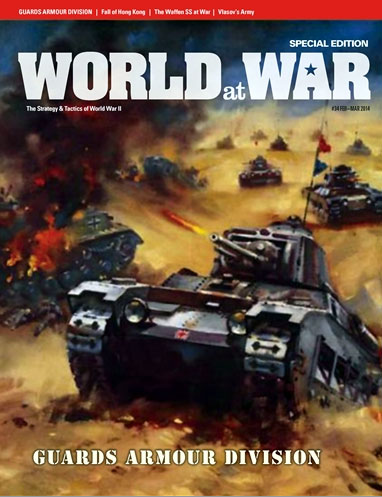 The Famous Divisions series, begun with Gross Deutschland Panzer (#20) and continuing with British Guards Armour, uses a system that represents a new evolution in design that brings tactical elements to an otherwise operational simulation. Recreating four battles of the British Guards Armour Division in 1944 and 1945, this game includes four battles: Operation Goodwood, Operation Veritable, Bonninghardt Ridge, and Joe’s Bridge. It was designed by John Schettler and developed by Eric Harvey and Ty Bomba.

The Famous Divisions Series offers a new concept: game play is governed by the drawing of "Event Chits" during combat. Combat is not simply resolved by comparing the attack strengths and defense strengths of units, but is modified by a random chit-draw of over 140 possible "events" that introduce the elements of chaos and unpredictability to combat resolution. Event Chits can be nullified by other Event Chits; so players never know how an attack may be resolved based solely on odds ratios.

Each hex represents approximately 500 meters from side to opposite side. Each game turn represents approximately six hours; however, the game turns aren't divided into separate friendly and enemy turns. Rather, each is comprised of numerous individual HQ activations. All of the HQ activation chits are placed into a cup, and each is drawn one at a time to initiate the activation (movement and combat) of a particular headquarters and its associated companies. When that HQ’s activation is finished, a new HQ is drawn from the cup, and then its activation begins.

While not a purpose-designed solitaire system, the Event Chit mechanism makes the series easily adapted to such play, since the player won't know what chits may be drawn that could alter combat, or what order the HQ activations will take place. Some examples of the 140 Event Chits are: Sniper, Good Commander, Ambush, Experienced NCO, Caught in Crossfire, Fanatic, Radio Out, Critical Hit, Frontal Assault, Elite Troops, Outflanked, Hand-to-Hand Combat, and Friendly Fire.