Vikings: Scourge of the North (Mini)

Previous product Product 1067 of 1287 Next product 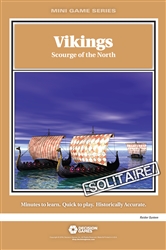 Vikings: Scourge of the North. Europe in the last centuries of Dark Age was beset by Scandinavian raiders. Their longships sailed the high seas, reaching lands as far as the Volga and North America. While mainly known for their pillaging, the Vikings were also explorers, traders, and colonists.

This is a solitaire game. You lead a band of warriors with their ships and weapons. Units represent historical Viking leaders such as Leif Erikson and Harald Hardrada. You can recruit elite huskarls and fanatic berserkers, and build more longships. You are in pursuit of gold, glory, and new lands to settle on a map running from Russia to Vinland, from Scandinavia to the fabled lands of the Byzantine Empire.

Saga cards send you on four different voyages of discovery and quest fulfillment. Voyage cards bring in special actions such as forming a shield wall in combat and ending the game with a Viking funeral.