Previous product Product 618 of 808 Next product 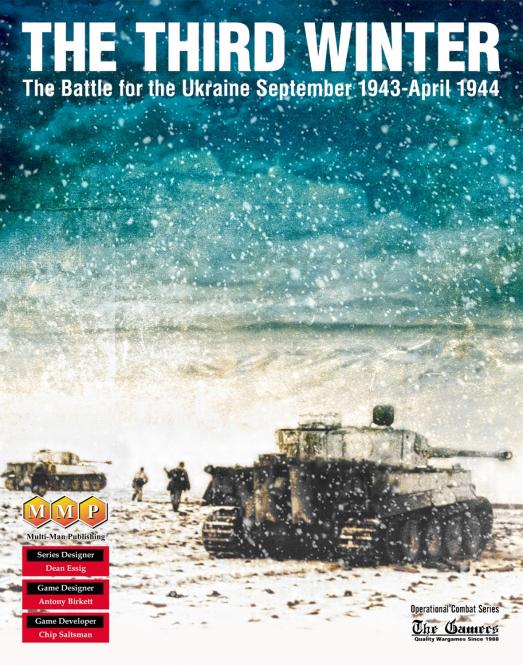 The Third Winter (TTW) covers the critical campaigns in the Ukraine during the period September 1943 - April 1944. This massive series of battles involved 75% of the Soviet and 85% of the German armored and mechanized forces, nearly 60 mobile divisions. The campaign proved to be the bloodiest in the war to date and The Third Winter covers the major engagements: the battle for Kiev, the winter counterstroke of Manstein's 'fire brigades', the tank battles at Kirovograd, the Korsun-Cherkassy pocket, the 1st Panzer Army’s “moving pocket” battle (Hube's Pocket), the fortress battles around Tarnopol in the spring of 1944, the baptism of fire for II SS Panzer Corps and the slugfest in Romania. The spring mud season brought the campaign to an end, by which time both armies were exhausted. The Red Army would quickly recover, the Wehrmacht could not.

The game area covers parts of Southern Russia, much of the Ukraine, southeastern Poland, and eastern Romania. The game begins with the Germans in full retreat to the Dnepr in late September 1943. By the campaign’s end in late April 1944, four Axis armies will have faced four Soviet fronts in a titanic struggle. Several scenarios supplement the main campaign, as the German army fights its “Third Winter” in Russia.

The Soviet command and supply structure is modeled through Front HQ markers. Fronts are either in “Offensive” or “Regrouping” status, allowing for shifting axes of attack and the on/off nature of Soviet operational warfare during this time. Each Front has an assigned Air Force. Tank and Mechanized Corps rebuilding takes place off-map, allowing for rapid strategic force shifts. The Axis player has operational flexibility, but must battle multiple challenging situations.

The Third Winter is a large OCS game, with over 1,700 combat units and a 44 x 66-inch map layout at a scale of 5-mile hex/3.5 day turn. The full Campaign game is 63 turns long, and there are three campaign scenarios so players can start at different points in the action. Also included are several one-map scenarios, including an 8-turn Korsun Pocket game played on a special map (otherwise parts of all four maps would be needed).

Special rules in this OCS series game are carefully researched to model key aspects of this enormous campaign: