Previous product Product 538 of 740 Next product 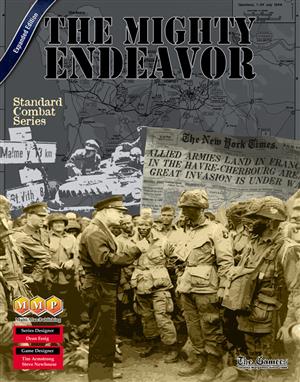 The Mighty Endeavor is both an updated version (with errata corrected, a couple of counters added, and other counters made to conform to the Expansion) covering the Western Front from the D-Day landings until the end of April 1945 and an expansion to the original game that adds the Eastern Front from just east of Warsaw during the same time period and a small map attachment that adds the Brittany Peninsula.

Following the same allocation of responsibilities as the game Battle for Germany (SPI, 1975), one player controls the Western Allies and the East Front Germans while the other controls the Russians and the West Front Germans. The two players compete by seeing which grouping of Allies can conqure as much German territory as possible—while they also play against their opponent to stop the opposite front. Never a dull moment as both players are always playing one side or the other at the same time.

The scenarios start the campaign at various points and as an added feature, the game includes a 16 Dec 44 (Bulge) campaign start for the Western Front.