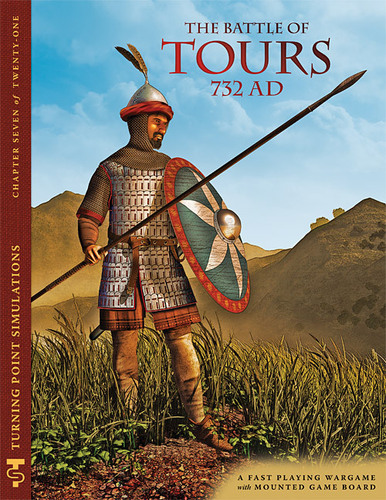 How Charles Got His Hammer...

At one time, it looked like the expansion of Islam was an unstoppable force.

By 725 A.D., Muslims owned virtually all of the Iberian peninsula and had crossed the Pyrenees, taking key towns in south-western France and forming a new province called al-Andalus. And then, politics began to trump religion. With a power struggle going on in Andalus proper, the local leaders in al-Andalus starting making accommodations with their powerful Christian neighbor to the north, Aquitaine.

This arrangement upset powerful people on both sides of the religious divide and they responded in basically the same way—they both invaded Aquitaine!

Scholars still debate on whether the Muslim leader, Abd ar-Rahman, was really aiming for conquest or actually just looking to neutralize a threat (and bring home vast amounts of Christian plunder). One thing is certain. The meeting between Abd ar-Rahman and the Frankish army under Charles (the Mayor of the Palace was his title at this time) would start a process of pushing Islam out of Spain that lasted for the next 700 years. But it all started at Tours...

Now, Turning Point Simulations gives you the chance to determine the future of France and Western Europe, with a tactical system which highlights the different strengths and weaknesses of both sides. For the Muslims, you’ll find them lightly armored, cavalry heavy, and prone to piecemeal attacking by tribes. The Frankish army is a century before Charlemagne, caught in transition from Roman heavy infantry tactics and the birth of armored knights. It is mobility versus defense, Moorish spears versus Frankish long swords. And you make the decisions.

Will Charles add “Martel” (the Hammer) to his business cards? Or will Ab ar-Rahman become the western Suleiman?   The answer is in your hands.

The Battle of Tours includes 100 counters that capture the widely varying weapons systems at this battle. You’ll find both light and heavy infantry, light and heavy cavalry, and (a few) mounted archers. But beyond unit types, you’ll command troops who actually fight "differently" from each other. Muslim units are activated by "tribes," as a collection of varied unit types that all happen to move together. Frankish units activate by type—all the heavy infantry, all the light infantry, all the cavalry. The difference means the two armies "feel" different to command. Players designate basic "orders" by selecting counters, then find out who obeys. The chaos and lack of real control conveys an historic chaos that really captures the flavor of this battle, where failure can mean slaughter, but victory can mean losing control, as troops turn from soldiers to looters.  You can be up one turn and down the next. Hang on for the ride.

That means straightforward rules, key insights into the history behind the game, and designs aimed at one-session conclusions and high replay value. With shifting Initiative and uncertain activations, no two Tours games will play the same.