Previous product Product 892 of 1194 Next product 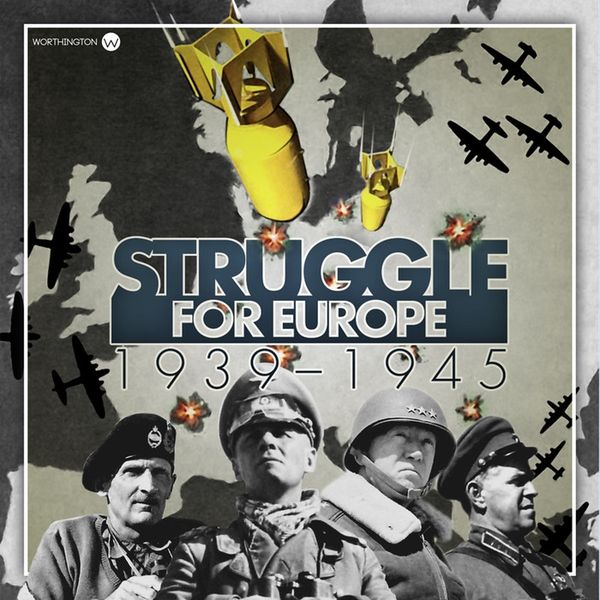 STRUGGLE FOR EUROPE 1939 – 1945 is a card driven, card destruction game on a large game board.  Modifying concepts from LINCOLN, TWILIGHT STRUGGLE, and others. Gamers will be able to play World War II in Europe in under 2 hours.

The Axis powers begin the war with decisions to be made, strike east or strike west.  The cards show the Axis strength early in the war. Things can change quickly.  Your decisions can determine that.

As the Allies, do you stiffen your defense as was done historically, or consider a strike into Germany.  With skillful play you may find allies as the war progresses.  The Russians can enter early, or later, based on your and the Axis card play.  Same for the Americans.

Each card leads to important decisions, U-Boat Attacks, The Blitz, Partisan Attacks, Convoys, The Great Commanders, Destroyer Escorts, Hitler's Interference, and more. The decisions are yours to make in the STRUGGLE FOR EUROPE.

Each side has three card decks.  The starting deck is placed face down and is the draw deck for that player.  The other two decks will enter the game later.   For the Allied player the Russians enter play with the second deck, and the Americans with the third deck.

Players are dealt cards, the number which can vary during the game.  During their turns players can play two actions, most of which require the play or destruction of a card.  The choices are:

After completing their two actions, they draw cards from the draw deck to their current hand size. Their opponent now completes two actions, and so on.

The game board shows important locations in Europe.  Each location is split in two by a line.  A location is either friendly, contested, neutral, or enemy controlled.

Grey and blue lines allows movement and attacks between locations. Victory locations are denoted by flags. The USA and Russia Track determine the possible early entry of USA and Russia into the game.