Previous product Product 828 of 1194 Next product 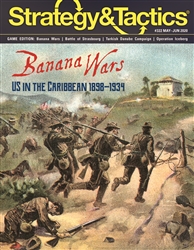 Banana Wars: Us Intervention In The Caribbean 1898-1935. Banana Wars is a two-player game simulating the period between 1898 and 1935 that saw increased US involvement due to the novelty and growing popularity of what else— the banana. During this period, the US Military participated in over 50 operations in a dozen Caribbean, Central and South American countries. Some interventions lasted for years. The occupation of Haiti lasted 19 years, the occupation of Nicaragua 21 years. In time, the US led seven separate invasions of Honduras. Our all but forgotten meddling in American affairs outside our own country led American writer William Henry Porter, known as O. Henry, to coin the term “Banana Republic.”