Previous product Product 463 of 848 Next product 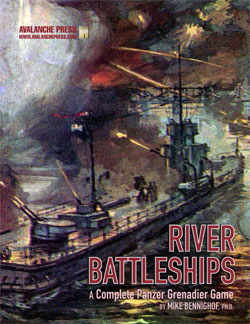 During the Second World War, several Eastern European nations fielded flotillas of river monitors - armored, shallow-draft warships that operated on the great rivers. These gunboats (anything on a river is a “boat” no matter its size) were designed to provide artillery support, engage enemy troops and if necessary, to fight other river monitors.

River Battleships introduces these armored warships to Panzer Grenadier. These are the actual river warships that served Poland, Czechoslovakia, Romania, Germany, Yugoslavia, Croatia, Austria and the Soviet Union. There are 45 river monitor pieces (the same size as the ship pieces in our naval games), 32 slightly smaller river gunboat pieces, 50 special markers for the river craft and 64 standard Panzer Grenadier sized pieces with troops, weapons and leaders.

It’s all wrapped up in our Playbook format - a complete game in a book. Everything you need to play - except for dice - is included!