Previous product Product 427 of 942 Next product 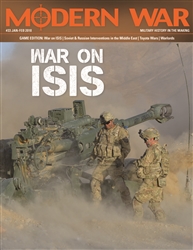 ISIS War. This game is set in a timeframe of the near future – 2017 through 2020 – in which the Iranians may have developed some kind of military nuclear capability. Even so, with the US likely still in another post-Vietnam-funk-type of “neo-isolationism,” the possibility for a blitz-style conventional Iranian victory across the region – aimed at fully establishing and certifying Tehran as the unchallengeable hegemon of the Gulf region – moves to the fore. The game’s scenario can also be taken as a model of a possible Iranian reply to a US and/or Israeli precision aerial campaign targeted against their nuclear development facilities. Furthermore, though entirely playable on its own, Isis War can also be played as an expansion and update of my earlier design, Oil War: Iran Strikes (Modern War #2).