Previous product Product 387 of 942 Next product 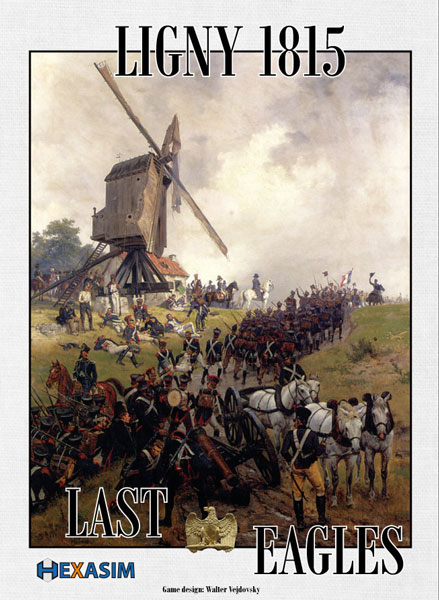 Ligny 1815, Last Eagles in the 3rd game in the Eagles of France series, following Waterloo 1815 and Austerlitz 1805

The game turn has a random ending procedure and players are never sure to have time to move all their formation reflecting the command control issues of any battle. Also, the fatigue and friction factors are built in a potentially shorter turn length in the latter stages of the battle. Focus on morale and attrition is a testimony of a battle which was a test of will of two densely packed armies fighting head to head. Players will have to choose which unit will "lead" the attack and take the first fire. Failing a key morale test can make the difference between a stalled attack or a promising breakthrough.

Each short scenario is played on its own map with enlarged hex, while the full battle is playd on the full map.

The 1815 campaign is famous for the “what ifs” related to reinforcements arriving in time that could have changed the outcome. The inability of D'Erlon's I Corps to join the battle for the French on June 16th might have saved the Prussians from a complete defeat. Besides D'Erlon, Mouton's VI Corps was not far behind and arrived too late to take part in the battle. On the Prussian side, there are some historical “what ifs” as well. Thielmann's III Corps could have been delayed. On the other hand, even if the probability is lower, Bulow's IV Corps may have also arrived if the Prussians had been better at anticipating Napoléon's moves. A fourth scenario allows the reinforcements to get into play without players knowing their exact time of arrival or even if they will show-up or not. In this alternate battle scenario, players will get their chance to change that. While diverging from the actual battle, players will be closer to the mind-set of the generals of that day, who had no certainty as to their final order of battle!

Finally, in a fifth scenario, the action starts earlier in the morning, letting the players decide to fight around Ligny or elsewhere, or to let the Prussians attempt a delaying action against the French instead of a head to head fight.

This game will link up with a coming release Quatre-Bras 1815: Last Eagles to provide an ultimate experience at this scale of the 16th of June 1815 battles that could have decided the campaign before Waterloo.