Previous product Product 329 of 958 Next product 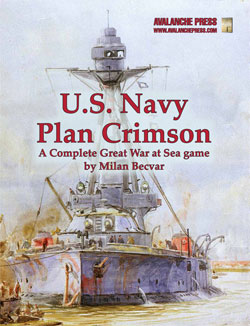 In the 1920’s, United States military planners hatched a scheme for the invasion of Canada. Called War Plan Crimson, it was a subset of War Plan Red, the plan for war with England, the largest, most detailed and most amended of all the U.S. war plans. A war with Great Britain and the British Commonwealth would be a world-wide conflict, easily making the term “Second World War” appropriate.

U.S. Navy Plan Crimson takes the Great War at Sea series to a very strange place: war on the Great Lakes. It’s easily the strangest game we’ve ever published, filled with ships that never existed waging a war that never happened – and all of it taking place in a set of teacups.

While we’ve created games based on wars that never happened, fought with ships that were never built, in each case military planners thought about these battles and the ships at least reached the planning stage.

In this case, designer Milan Becvar has created a reality, and a game based on it, out of his fevered Canadian imagination. That allows for a wide-open strategic situation, in which friendly and enemy bases are so close together that fleets cannot hope to elude one another. And you can blow up the designer’s house.

There are 50 “long” ship pieces and 180 square pieces, all of them die-cut and silky-smooth. The American and Canadian fleets are built around “lake battleships,” similar to the coast defense vessels of other navies, with shallow draft and anywhere from four to seven big guns. There are also a handful of cruisers and a large number of destroyers, torpedo boats and mine craft.

The map, by Guy Riessen, covers the Great Lakes basin at the usual 32 miles per “sea” zone. All of the lakes are covered, linked by canals, both those that existed and those that could have been built. Both sides of the lakes are dotted with ports, with the American side hosting many vulnerable industrial centers and the Canadian shores within easy reach of the Dominion’s vulnerable east-west lines of communication (and their doughnut supplies).

There are 32 scenarios. The game uses the regular Great War at Sea rules, with some special rules to address this unusual situation.

U.S. Navy Plan Crimson comes in our popular Playbook format. It’s a complete game: everything you need to play (except dice) is included in the Playbook.