Previous product Product 245 of 808 Next product 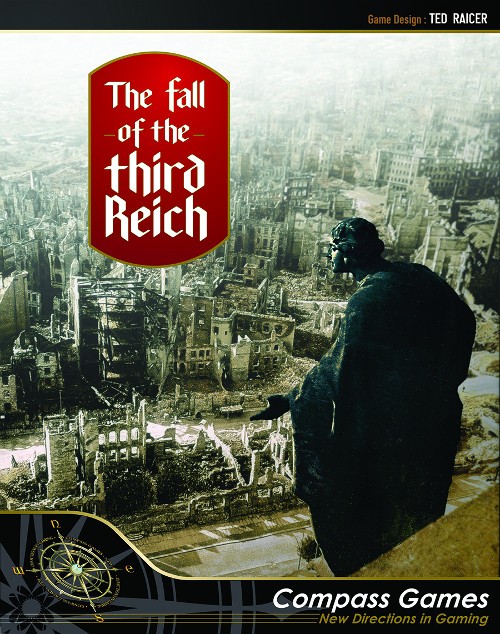 Fall of the Third Reich

The time is July, 1943. From the beaches of Sicily to the plains of central Russia, millions of men are poised to decide the fate of Europe and bring about the end of WWII...

From award-winning designer Ted S. Raicer, The Fall of the Third Reich covers the dramatic last two years of WWII in Europe, as the Western Allies and the Soviet Union fight against fierce German resistance to bring down the Thousand-Year Reich. Two large hex maps cover Europe from France to Central Russia, and Leningrad to Sicily. Units are Armies, Corps, and in a few cases, Divisions. There are twelve two-month turns.

Those turns play quickly, and yet there is a lot of subtlety within each one, with rules for both reaction and exploitation. Getting the most out of the various movement segments is essential for both players: as the Axis for plugging gaps in the front line, and as the Allies for exploiting every last opportunity to move ever further into the Third Reich proper. But the German player will quickly learn that a passive defense is doomed to fail, and that selective counterattacks are vital to hold the enemy at bay.

The game includes rules for Soviet and German Command (Stavka), while the effects of Hitler's increasing interference in military affairs is presented through a rule which requires the German player to use OKW (West Front Headquarters) or OKH (East Front HQ) to be able to retreat infantry units from an enemy ZOC. While the Soviets and Germans begin the game locked in a death struggle at Kursk, the Allies face the early dilemma of where to invade, with a choice of invasion sites ranging from Holland to Greece. Knock Italy out of the war or Second Front Now! in Northwest Europe: the choices are yours.

Supply rules have been kept as simple as possible, while still modeling the historic importance of logistics. The Western Allies in particular will learn the importance of ports in supplying their armies, and have to base their strategy around them. Perhaps most significantly, the game effectively models the Strategic Air War over Europe with only a few simple rules and a handful of counters. But though easy to learn, this ‘game within a game’ can have a dramatic impact upon the course of the war, as the Allies must prioritize their air resources while the Luftwaffe struggles both to slow the Allied air offensive and support the German armies in the field. The challenges are numerous and subtle.

Other rules cover variable (and degrading) German troop strength,  Allied Airborne drops, Strategic Transit, Forts, Yugoslav Partisans, and Axis Minor Powers, including Italian Surrender. The game can be played by two (Axis and Allied/Soviet) or three players (Axis, Allied and Soviet) but also works well solo. The Fall of the Third Reich is a game of large scope and nail-biting decisions, combining fidelity to history with a fun playable game system."

Solitaire Suitability: 8 out of 10

Players: Best with 2 players but can be played well with 3 players or solitaire

One and a half Countersheets

One Box and Lid set