Previous product Product 256 of 958 Next product 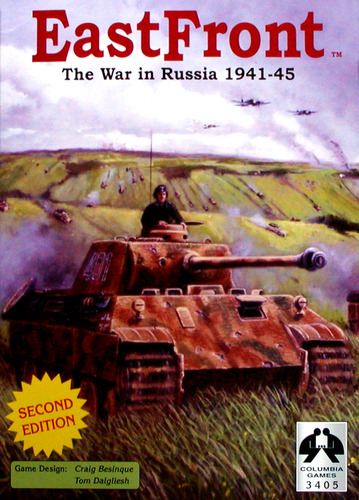 Test your strategic skills! Command the Soviet Red Army or the German Wehrmacht on the vast steppes of Russia. Replay the epic Barbarossa, Stalingrad, and Kursk campaigns.

EastFront is part of a three wargame series: EastFront, WestFront, and EuroFront. The second editions include larger maps, more units, and seamless integration into EuroFront.

EastFront simulates the largest military campaign in history: the "Eastern Front" in World War II, 1941-45.  Although it is largely unrecognized in the West, World War II in Europe was won and lost on the Russian Front. In November 1942 the Axis tide of expansion was reversed at El Alamein in North Africa and at Stalingrad in Russia. However, while Montgomery chased Rommel's forces of about 3 corps westward in North Africa, the Red Army began driving 45-50 German corps back towards Berlin. In July, 1943, the Red Army crushed Germany's last eastern offensive at Kursk, a titanic battle involving thousands of tanks and millions of men. In the same month the Allies invaded Sicily and defeated 3 German units on this scale. By the time the Allies landed (with five Corps) in France on D-Day, Germany had been retreating in the east for 18 months. By then, she was fighting to survive, not to win. The Allies lost around a third of a million men fighting Hitler. Russia lost over 13 million, forty times as many.

One player commands the Axis forces, the other commands the Soviets. The mapboard depicts the eastern half of the European theater in WW2. The mapboard is divided into hexagons, called "hexes", to determine location and movement. Terrain features affecting play include: rivers, forests, mountains, marshes, cities, ports, and railways.

Scandinavia (Finland and points north), the MidEast (Turkey/Persia and points south) and the MedFront (North Africa) are out of play. These areas come into play in EuroFront, which portrays the entire war in Europe 1939-45.

Units in play normally stand upright, with their labels facing the owning player. This provides simple yet elegant Fog of War in that players cannot see the type or strength of opposing units.

The six basic unit-types are: Armor, Mechanized Infantry ("Mech"), Infantry, Shock, Cavalry, and Headquarters. As each unit-type has a fixed movement rate and firepower rating, these numbers are not shown on the label.

The large numbers surrounding the unit symbol show the unit's strength, called Combat Value ("CV"). Units gain and lose strength in steps of 1 cv. A unit's current strength is the number along its top edge when standing upright.

For game purposes, the Eastern Front campaign is divided into scenarios, each covering a 6-month period of the war. A scenario can be played in a sitting (4-6 hours), and two or more scenarios can be joined for longer games. The winner of a scenario is determined by Victory Points (VPs), which are awarded for current Production Levels and HQ steps remaining in play, and subtracted for eliminated friendly units.

Each scenario has a VP handicap which is added to or subtracted from Axis VPs, relating VP totals to historical results.

A month consists of a Production segment followed by two Fortnights of play. Production involves adding replacement steps to units in play, and rebuilding destroyed units into 1 cv units, or cadres. Control of economic objectives on the map yields Production Points, which are used to "pay" for these builds. Both players perform production simultaneously.

The player taking the current Player-Turn is called the Active Player (the other player is Passive). A Player-Turn usually begins by activating one or more HQ units. Each activated HQ, depending on its current strength, exerts command over all units within a Command Range of 0-3 hexes, enabling these units to move.

Battles occur when both players have units in the same hex. During combat, units are revealed to the opponent. Battles are not necessarily settled immediately. They sometimes continue for several months until one side retreats or is destroyed. Combat may occur in any ongoing Battle at the option of the Active player, and must occur on the first turn of a Battle. Any combat occurring outside Command Range is fought by the active player at a disadvantage.

A round of combat consists of an exchange of fire: airpower first, then defensive fire, and finally offensive fire. Enemy fire results in unit attrition. Forced retreats (repulses) may occur in cases of River, Air, or Sea Assaults.

Weather exerts a considerable influence in the game, affecting unit speeds and turn sequence. Mud and Snow weather also alter some terrain, further affecting movement and combat, and can reduce the command range of HQs. During most months the weather is known, but during Spring and Fall it is unpredictable and determined by die roll.