Previous product Product 230 of 942 Next product 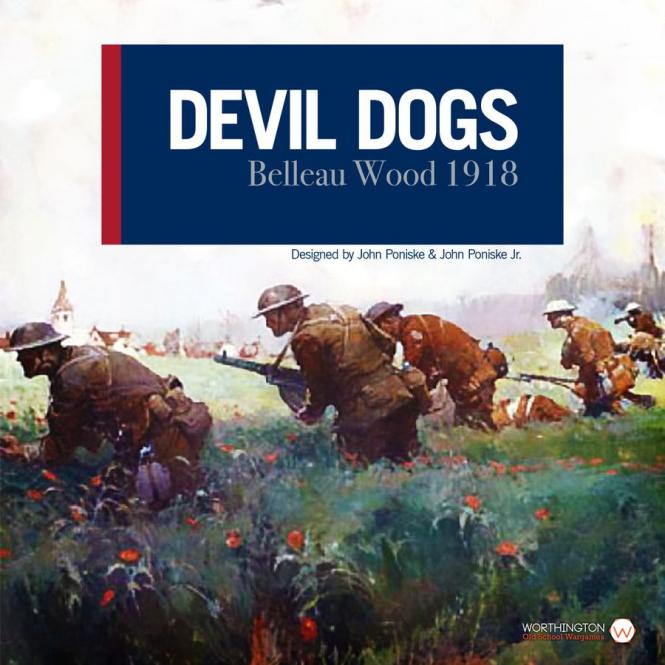 DEVIL DOGS: BELLEAU WOOD 1918 is designed by former Marines John Poniske, and his son John Poniske Jr.   The game is a card driven, hex and counter war game that uses a truly unique diceless combat system to allow gamers to refight the 1918 Battle of Belleau Wood that spelled the end of World War I for the German army and the beginning of the legend of the US Marine Corps as the Devil Dogs.

The game will come with a large hand drawn game board drawn by historical artist/cartographer Rick Barber showing key terrain features.  The game comes with 5 scenarios portraying different points in the battle.

Over 200 large counters with beautiful rounded corners.  A scenario book with 5 scenarios (several that can be played in an hour), that cover the battle.

The units reflect the headquarters, infantry, mortars, engineers, and machine guns of the American Marines, US Army, French Army, German Army, as well as additional units.  The units have identifiers for, no combat values featuring the unique diceless combat.

Cards are played from each players hand onto the board in each of the 4 sectors of the battlefield. Initiative is determined and the type of order on the card is set by who has initiative in that sector. Mortar fire and gas driftfollowed by movement and combat finish the turn in each sector.

Each type of combat unit is worth a different value in combat when determining casualties on the opponent, as well as proximity and terrain. The closer you are to the enemy in the open, the more likely you are to sustain casualties.