Previous product Product 316 of 1194 Next product 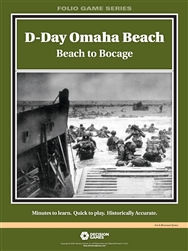 Omaha Beach was anticipated to be the worst landing because of the bluffs looming over the strand. The Allied player must muscle troops onshore against the best German infantry in the region, then push forward to link up with the landings on either side. If that can be accomplished, the opposing forces will battle through the constricting bocage country for control of the road junctions in the area, particularly St. Lô.