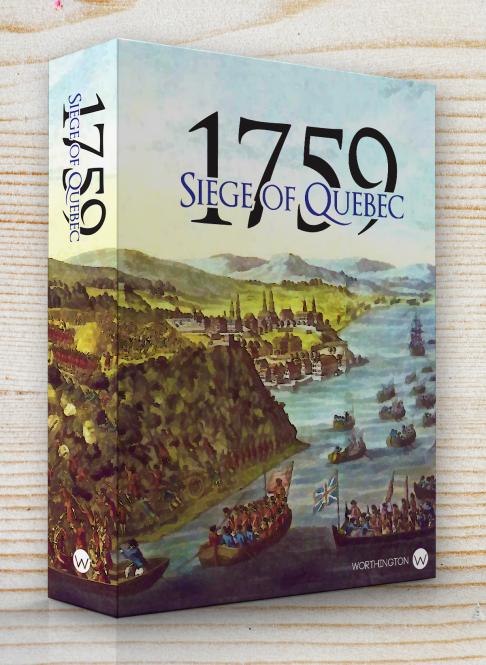 1759: Siege of Quebec is the first in our Great Sieges game series. These games highlight command decisions for players against a solitaire game engine opponent. They have been designed for easy set up and quick game play. Game unit placement is shown on the game board and units are wooden markers representing troop and ship formations. The game was developed for solitaire play and players can play as either the French or the British against the solitaire player game engine. There is also a two player version of the game.  Both sides require you to make great decisions based on good strategy, keep your wits about you when orders do not turn out well, and press on to victory.

Game play is centered around using Field Commands to issue orders by the British and French commanders to defeat each other. Either side can be defeated by their morale falling too low. The game allows you to play either side against a solitaire opponent that has 3 levels of difficulty.

Pick the side you want to be, French or British, and then shuffle the solitaire card deck for your opponent. The card mix used by the solitaire opponent differs from game to game so no two games play alike.

Each commander (solitaire or player) can issue one order per game turn from their Commands available.  Your order is carried out based on your strategy and current situation faced.  Your choice can cause multiple actions and reactions with results that cause troop eliminations, morale reductions, and events to occur.

The game board map shows the impact of orders by either removing units from play, moving units, or recording affects to morale. During game play one side is played by you (either British or French) and uses player Field Orders from the Field Order Book and the other side uses the solitaire order cards for issuing orders. You issue one Command order per turn. You are never sure of what counter measures the solitaire side is planning to use against your Orders issued until after your order is issued and their counter order is revealed. Field Orders issued by you determine results applied to each side based on its affect compared to the solitaire counter order played. These results generally show French and British troop reductions in the locations the orders are carried out, morale reductions, and movement success or failure.

Any time one side's morale reaches zero during a turn, the other side wins the game. Also, the French win if they hold out until the British Navy departs. And the British can win by taking Quebec.

1759 Siege of Quebec was designed as a solitaire game but it can also be played by two players.  The game includes a deck of cards that are used for the two player version.  The two player game is played just like the solitaire version of the game except the Command Decision Cards Deck is used as the draw deck for BOTH players. Both players (French and British) use their Command Field Orders Book to issue orders (Using cards representing the Field Orders, 1, 2, 3, 4, etc.). Both players also play a counter order (A, B, C, D, etc. using counter order cards) against their opponent's Field Order played for the turn.